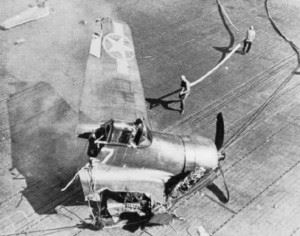 A U.S. Navy Grumman F6F-3 Hellcat after crashing on a U.S. Essex-class carrier off Peleliu in 1944. The plane had been shot up over Peleliu, taking out the hydraulics. With the shot up ailerons and a large hole in the right wing, the pilot managed a landing. However, he struck a gun turret and the plane disintegrated. He survived with minor injuries.
Note: Although the Naval Aviation News describes this as an accident happened off Peleliu, this scene appears in the movie “The Fighting Lady” in an earlier context. Also, the US insignia is the mid-1943 one, with red borders. The crash therefore probably happened during Yorktown´s working-up period in 1943.