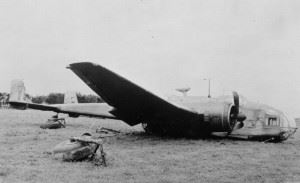 On 2 August 1943, Hampden torpedo bombers of No 455 Squadron RAAF attacked a convoy off the Norwegian coast. This aircraft (L4105/D) suffered massive flak damage to its tail – half the elevator was blown away, the starboard fin twisted and the port rudder fouled by debris. The crew were forced to lash a rope around the rudder bar and took turns helping the pilot, Flying Officer Iain Masson, hold the aircraft straight as they limped back to Leuchars for a crash-landing.