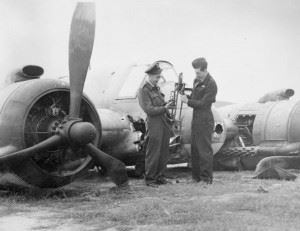 Flying Officer Lee Turner RAAF (navigator, left) and Flying Officer Steve Sykes RAAF (pilot, right) of No. 455 Squadron RAAF, inspect the top of an armed trawler’s mast which became embedded in the nose of their Bristol Beaufighter TF Mark X during a low-level attack on enemy shipping in the harbour of Marsdiep, Holland, by the combined Langham and North Coates Strike Wings on 12 September 1944. Sykes brought the damaged aircraft back to Langham and made a successful crash-landing, in which Turner was slightly injured.