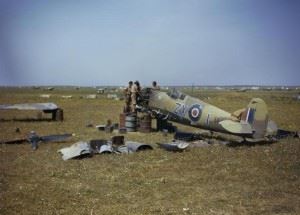 An Advanced Servicing Unit dismantles Supermarine Spitfire Mark IX, EN459 ‘ZX-1’, of the Polish Fighting Team, attached to No 145 Squadron, RAF in Tunisia. The aircraft was damaged on 6 April 1943 when, after shooting down a Messerschmitt Bf 109, it was attacked by another Bf 109 and hit in the engine. The pilot, Flight Lieutenant Eugeniusz Horbaczewski, was able to glide in to Gabes for a forced landing.