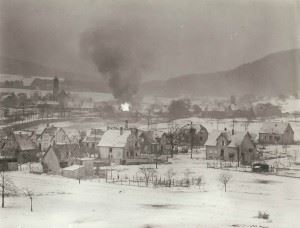 American forces are trying to recapture this German town (unknown) from German mountain troops who infiltrated it during the night, dislodging American troops and taking a number of Prisoners. Hotel ‘Wenk’ and Gasoline are in yard and hit by a tracer bullet, resulting in the burning, as seen in photograph. In the church tower on the left is a German lookout, who is also sniping at the U.S. soldiers.