You may know that Archduke Franz Ferdinand was the reason that World War I was begun, but who was he really? And why did his assassination spark one of the largest wars in modern history?

Lets start with who he was. Archduke Franz Ferdinand was third in line for the Austrian throne, the oldest son of Archduke Karl Ludwig. In 1889 the Crown Prince Rudolf committed suicide, leaving Ferdinand’s father as the heir to the throne. When he died of typhoid fever in 1896, Ferdinand became the unlikely heir.

In 1900 Ferdinand married Countess Sophie Chotek von Chotkova of Germany. Her house was not a reigning family, so Ferdinand had to get special permission to marry her from the Emperor. However, as a condition of their marriage, Sophie could not appear with Ferdinand anywhere in public, including the theatre or the royal carriage. They had three children together, and Ferdinand had to renounce their rights to the throne of Austria. 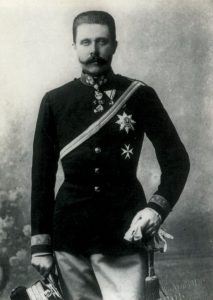 Ferdinand’s political opinions were what made him unpopular to some of the public, including the ruling class. He wanted to give smaller ethnic groups within the country, including the Czechs and the Slavic people, more autonomy, dividing the Austro-Hungarian dualism into a trialism. He was apathetic towards Hungarians and advocated careful relations with Serbia.

Sarajevo had been annexed with Bosnia into the Austro-Hungarian territory in 1908. The Serbians were very angry about this as they wanted those annexed provinces to be part of a Greater Serbia. In 1914, a Serbian terrorist group called the Black Hand promised to assassinate the heir apparent.

On June 28, 1914, Ferdinand and his wife were visiting Sarajevo to inspect armed forces in the area. Unfortunately the date coincided with the anniversary of the Battle of Kosovo in 1389, when Serbia was defeated by the Turkish Empire. The date was significant to nationalists, and they were exceptionally upset about the current state of the Austro-Hungarian takeover of their land.

As the couple toured through the city in an open motorcar, a terrorist threw a bomb at the open car. Fortunately, it rolled off, leaving the car unharmed but injuring one of their security detail. The motorcade moved on, but the car took a wrong turn at Appel Quay and Franzjosefstrasse, leaving the pre-approved route and venturing into an area with little to no security. A friend of the original terrorist was standing in the area, and saw the opportunity. He shot Franz Ferdinand and Sophie at point blank range, before being tackled by a bystander and later arrested. The couple died within the hour.

The assassination gave the sitting government a chance to go after the Serbian government, using the assassination as a way to end the “policy of patience.” The government reached out to Germany, who gave their support for a war with the Serbs, known as the “Blank Cheque.” The Austrian government then gave a list of demands to the Serbians, hoping they would be rejected in order to start a war they so desperately wanted. This started the catalyst for what we now know as World War I, with Germany backing Austria, Russia backing Serbia, and allies piling on for both sides. Within a week of the demands being sent, World War I started.