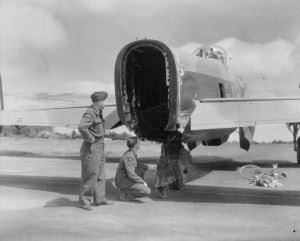 Back at their base, East Wretham, Norfolk, two members of the crew of Avro Lancaster B Mark II, DS669 ‘KO-L’, of No. 115 Squadron RAF, examine the rear of their aircraft, where the rear turret, with its unfortunate gunner, was sheared off by bombs dropped from an aircraft flying above, during a raid on Cologne on the night of 28/29 June 1943.