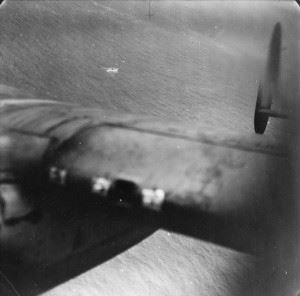 Photograph looking back over the starboard wing of a Lancaster of No 61 Squadron, Bomber Command, after an attack on U-751 in the Bay of Biscay, 17 July 1942. The U-boat had been attacked and crippled by a Whitley of No 502 Squadron earlier, before being finally sunk by depth charges dropped by the Lancaster.