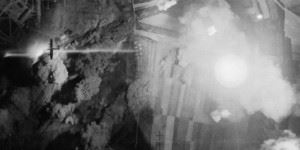 Vertical photograph taken during the night attack on the German tank and lorry depot near Mailly-le-Camp, France, by 346 Avro Lancasters of Nos. 1 and 5 Groups. A Lancaster, silhouetted by the large explosion, clears the target area during the raid which, although successful in the destruction caused, was costly in terms of aircraft losses, 42 being shot down by Luftwaffe night fighters.