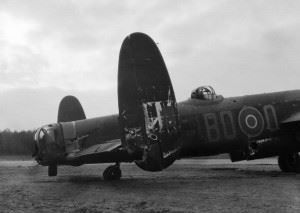 The rear section of Avro Lancaster B Mark I, DV305 ‘BQ-O’, No. 550 Squadron RAF based at North Killingholme, Lincolnshire, seen at Woodbridge Emergency Landing Ground, Suffolk, after the severely-damaged aircraft crash-landed there following an attack by a German night fighter over Berlin on the night of 30/31 January 1944. In the course of the attack both the rear gunner and the mid-upper gunner were killed, and the bomb-aimer baled out having misunderstood orders. The pilot, Flying Officer G A Morrison, managed to bring the crippled aircraft back without any navigation aids.