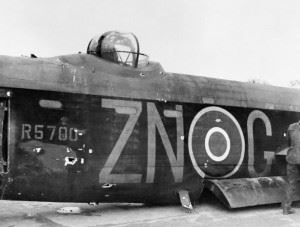 The damaged fuselage and mid-upper turret of Avro Lancaster B Mark I, R5700 ‘ZN-G’, of No. 106 Squadron RAF based at Elsham Wolds, Lincolnshire, after crash-landing at Hardwick, Norfolk, following an attack by a German fighter over Essen. R5700, was among 60 aircraft taking part in the first “Oboe” raid on Essen on the night of 13/14 January 1943, when it was twice attacked by a Focke Wulf Fw 190 “Wilde Sau” night-fighter shortly after bombing the target. The aircraft was severely damaged, the rear gunner was badly wounded and the mid-upper gunner, Sergeant J B Hood, was killed, but the pilot, Sergeant P N Reed, managed to fly the crippled bomber as far as the USAAF base at Hardwick before executing a successful crash-landing. Three weeks later, Sergeant Reed and his crew failed to return from a raid on Hamburg.