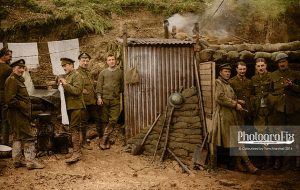 This photograph shows a group of soldiers standing in the entrance to a dugout. Other men are outside, standing beside a washing line with towels on it. A pot is steaming on a brazier made of a tin drum. The cap and collar badges of the men are not distinct but appear to vary, suggesting they are from more than one unit. This rather domestic scene appears well removed from the reality of the trenches at the Front. It may have been intended to counter criticism of the campaign by implying that it was better organised than was the case.