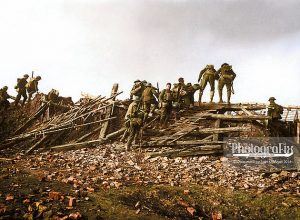 Soldiers after crossing the River Somme. According to the photograph’s original caption these soldiers are the first to have crossed the River Somme. Some of them are clambering up a temporary walkway. Others in the background manage to scramble up the embankment. The foreground is littered with debris. The slang British term used in the original caption for German, ‘Hun’, gained popular usage after Kaiser Wilhelm II urged his troops to ‘behave like Huns’ to win the war. Scenes such as this were commonly used as propaganda, intended to boost morale amongst the troops.