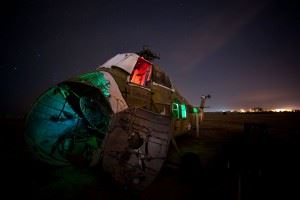 A UH-34D Seahorse helicopter, which began service in 1952 as a Navy anti-submarine warfare helicopter and served as the primary Marine Corps assault helicopter of the Vietnam War. This one now sits as part of the more than 4,400 aircraft deactivated in the “boneyard” of Davis-Monthan Air Force Base, Ariz. (Credits: U.S. Air Force photo/Senior Airman Andrew Lee)