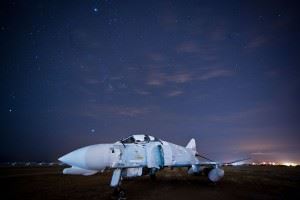 An F-4 Phantom II sits by itself in the “boneyard” at Davis-Monthan AIr Force Base, Ariz. The aircraft served as the principal air superiority fighter for the Air Force during the Vietnam War, and became important in ground-attack and reconnaissance roles late in the war. (Credits: U.S. Air Force photo/Senior Airman Andrew Lee)