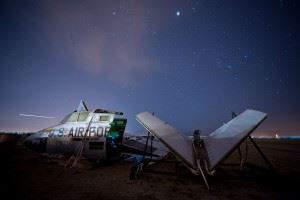 The remains of a B-66 Destroyer sit palletized within the 309th Aerospace Maintenance and Regeneration Group at Davis-Monthan Air Force Base, Ariz. The aircraft was a light bomber with the Tactical Air Command and the RB-66 models were used as the major night photo-reconnaissance aircraft for the Air Force during the 1950s. (Credits: U.S. Air Force photo/Senior Airman Andrew Lee)