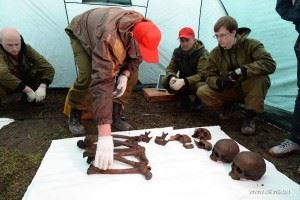 Remains of four Soviet Union soldiers are found by local villagers on the Huoshao Mountain in Muling City, northeast China’s Heilongjiang Province, May 12, 2015. A one-month-long China-Russia search began Tuesday to locate the remains of Soviet Union soldiers who died in China fighting Japanese invaders in 1945. A 17-member Russian team, along with a group of Chinese archaeologists, are involved in the dig. (Xinhua/Wang Kai)