Editor’s note: Photos and photo captions are courtesy of artists’ Facebook pages, but may be edited for brevity. Photos featured are from Defense of Department (includes U.S. Navy, Marines, Army, Coast Guard and Air Force) and military service pages, National Archives, Library of Congress, newspapers or donated by third parties. Permission was granted to feature the colorized photographs on Argunners. 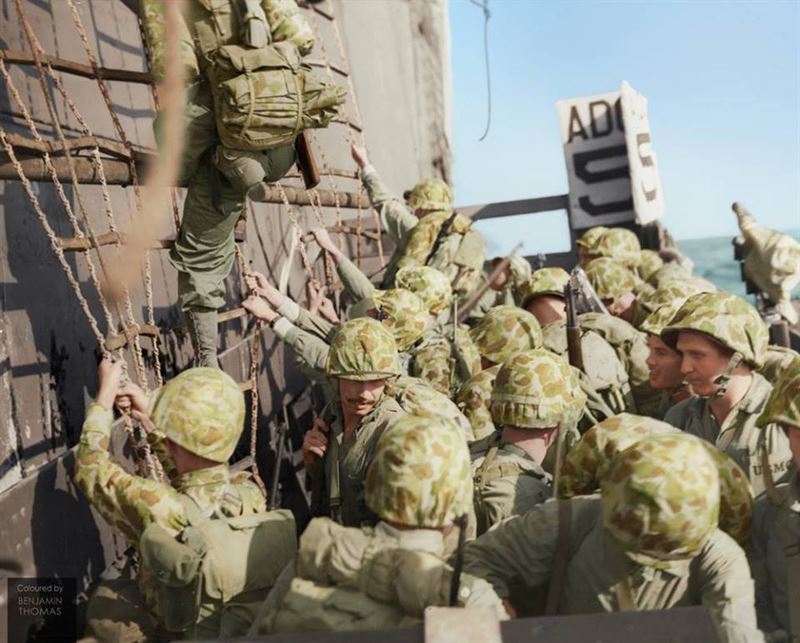 United States Marines climbing down the nets into landing craft during the Battle of Peleliu, September-November 1944. [Colorized by Benjamin Thomas] 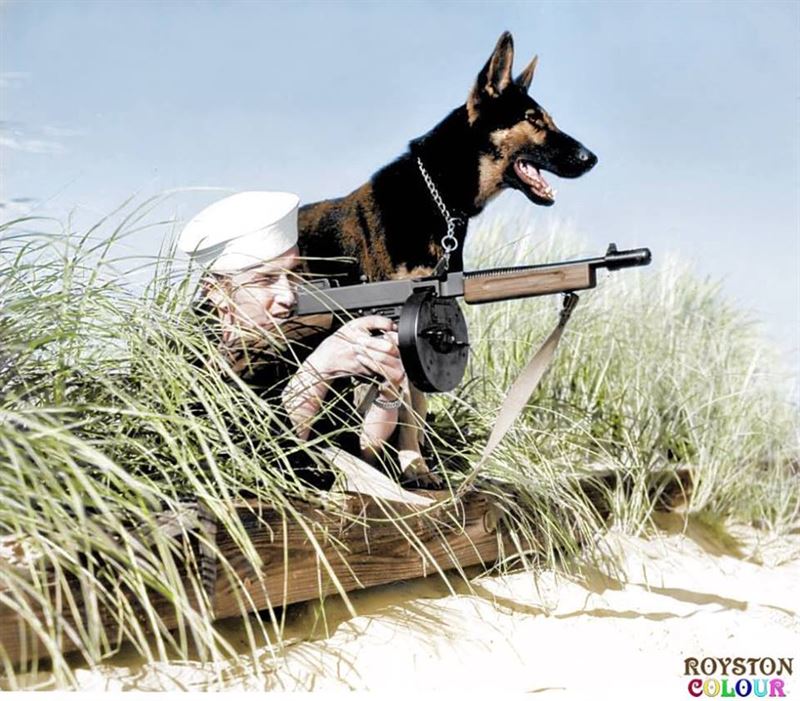 ‘Dog Beach Patrol’, (possibly on Parramore Beach, Virginia, US October 1943) A Coast Guard and his Alsatian dog poses with a M1928A1 Thompson SMG with 50-round drum magazine – .45 ACP. [Colorized by Royston Leonard] 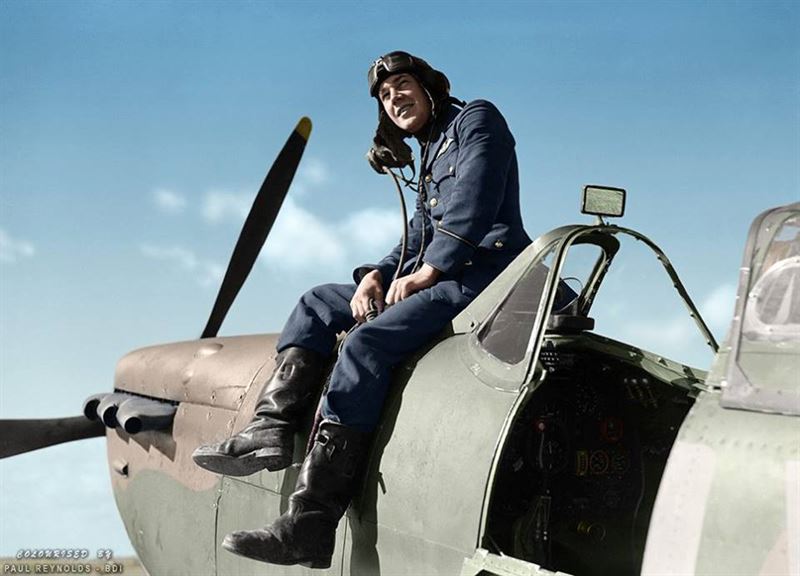 Flying Officer Leonard Haines of No. 19 Squadron RAF sits by the cockpit of his Supermarine Spitfire Mk.Ia (QV-?) at Fowlmere, near Duxford. September 1940. [Colorized by Paul Reynolds] 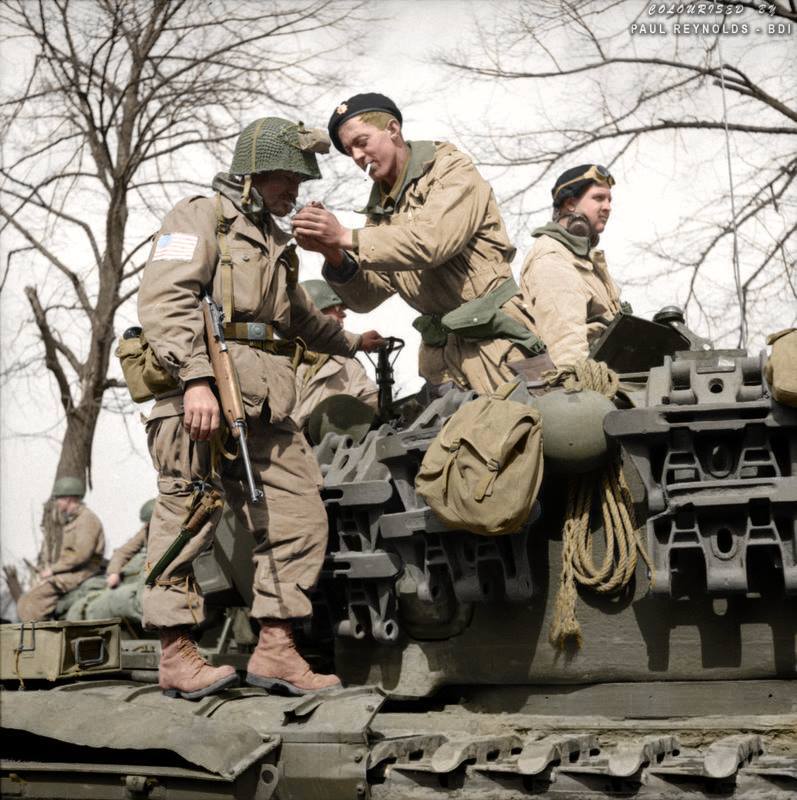 A paratrooper from the American 17th Airborne Division gets a light from a Churchill tank crewman of 6th Guards Armoured Brigade near Dorsten in North Rhine-Westphalia, Germany, 29th of March 1945. [Colorized by Paul Reynolds] 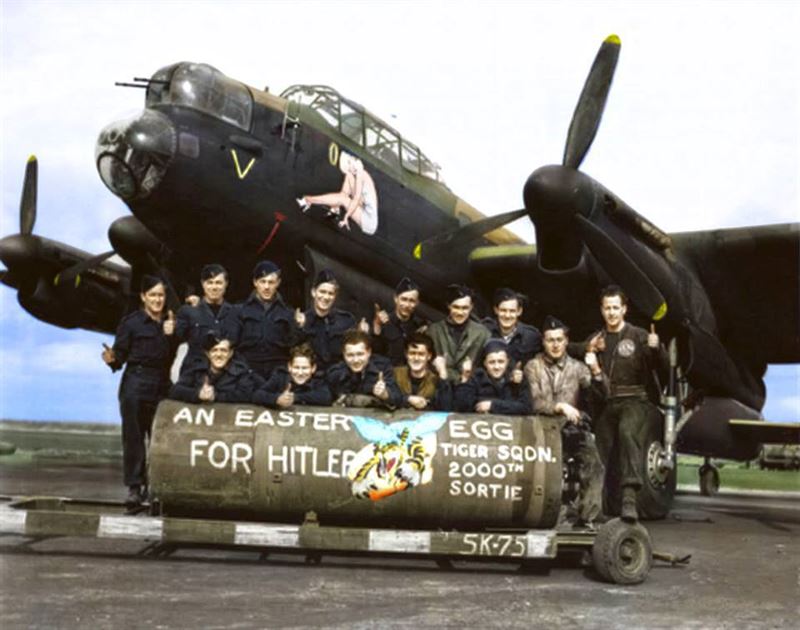 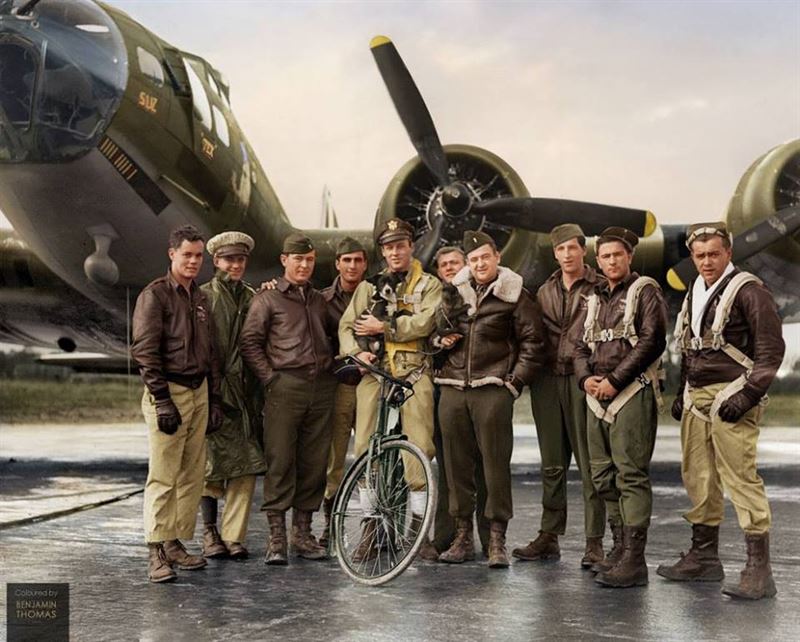 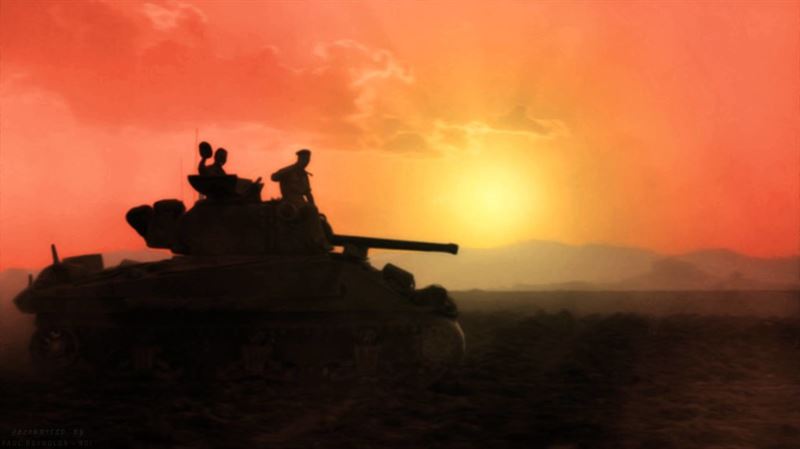 ‘Operation Husky’ A Sherman tank of ‘A’ Squadron, 50th Royal Tank Regiment, 23rd Armoured Brigade is silhouetted by the setting sun. 1st of August 1943, in Sicily. [Colorized by Paul Reynolds] 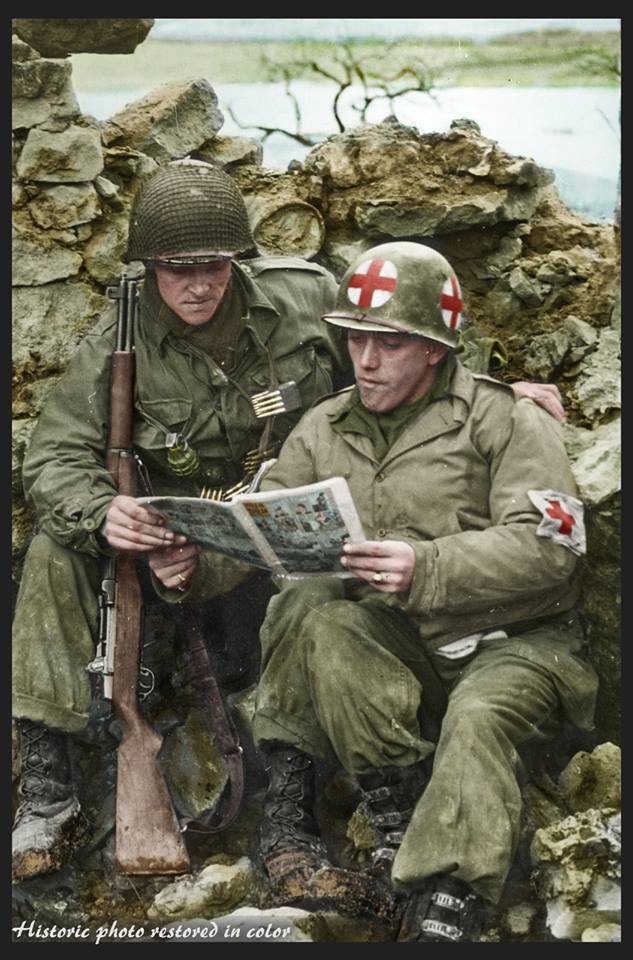 An American Medic and a GI of the US. 80th Infantry Division reading a comic at Reisdorf in Luxembourg near the German Border. 12th of February 1945. Left to right : Pfc Reynold H. Bush Middletown, Ohio , and Pfc Aurelio Maltese, New York. [Colorized by Johhny Sirlande] 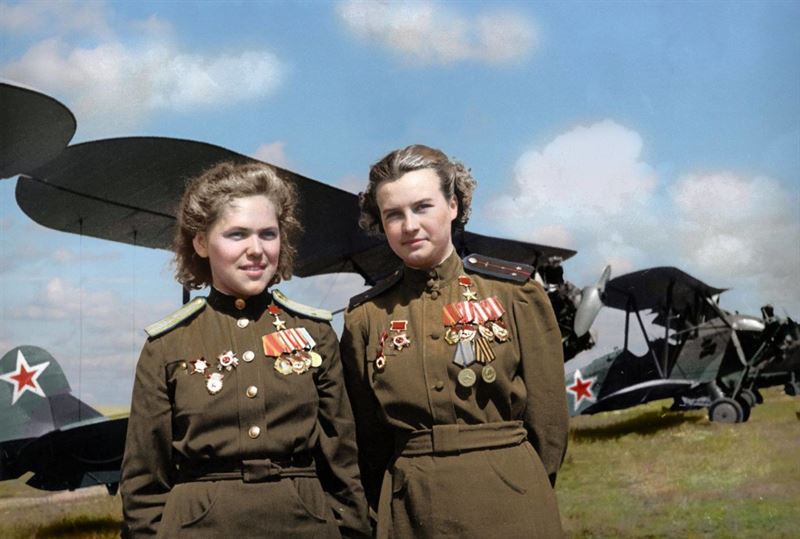 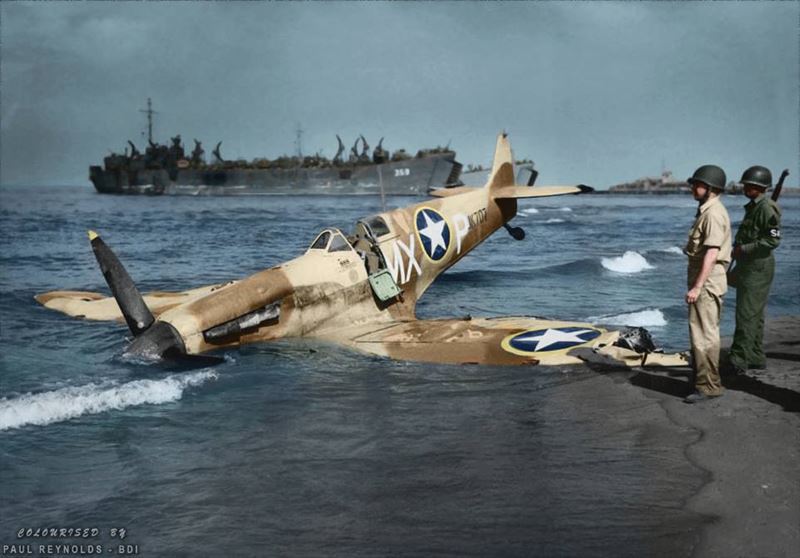 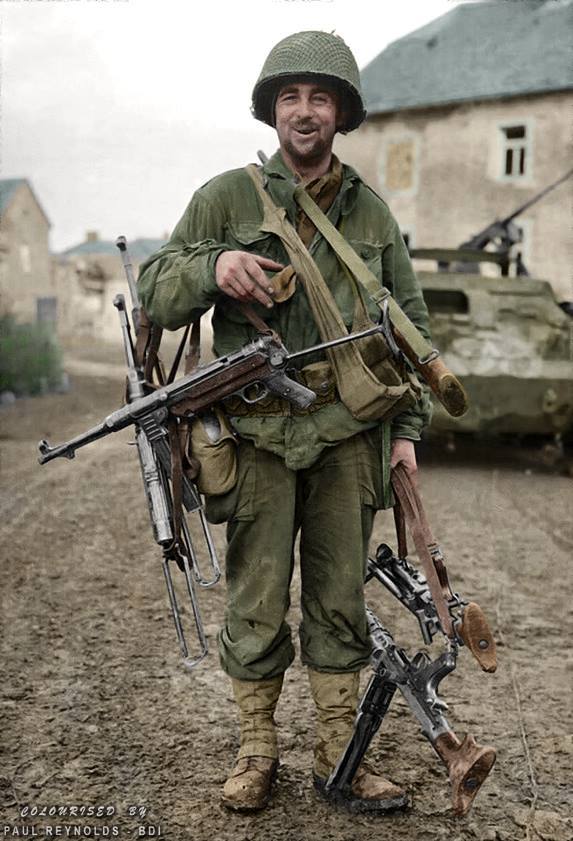 This photo was on the cover of ‘YANK’ Magazine, Continental Edition of January 14, 1945, entitled “PRESENT ARMS” it featured Pfc. Robert Leigh and his collection of enemy weapons taken by the 83rd Infantry Division during the Battle of the Hürtgen Forest. (MP.38 and MP.40’s, an MG.34 and an MG42). [Colorized by Paul Reynolds] 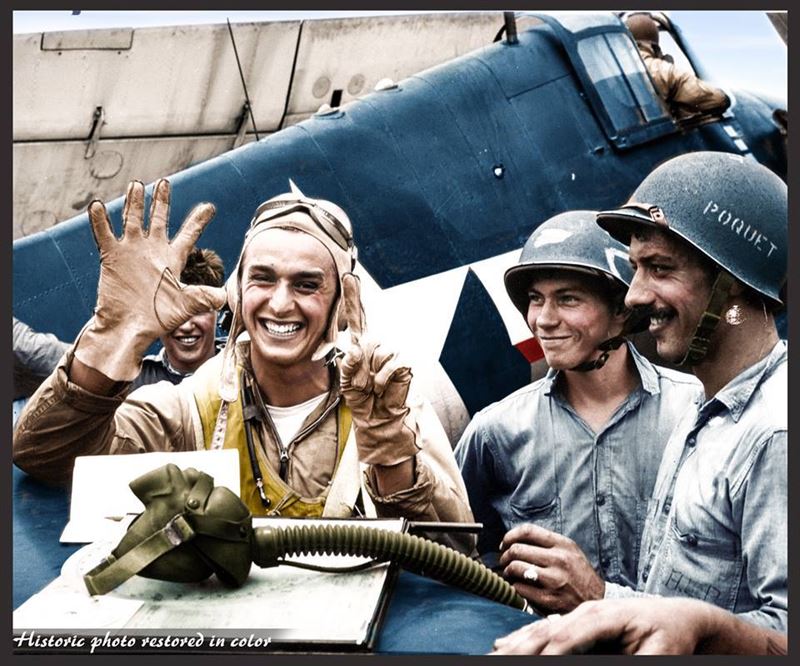 Alex Vraciu, who was just 25 when he reigned as the US Navy’s top World War II fighter ace after downing 19 Japanese aircraft and destroying 21 more on the ground in only eight months in 1944, died on January the 29th 2015 in West Sacramento, Calif. He was 96. [Colorized by Johhny Sirlande] 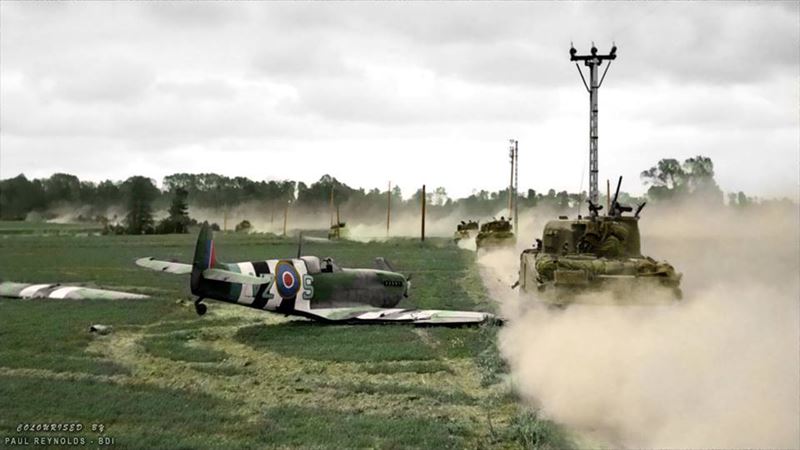 On the 11th of June 1944, F/O H.G. Garwood of 412 Squadron was flying VZ-S (MJ 255) MK IXc Spitfire when it suffered an engine failure* near Tilly-sur-Seulles, France, during the allied invasion. He was forced to execute a wheels-up landing which tore the port wing off as it looped in the grass. Fortunately Garwood was able to make it back to his base unharmed. [Colorized by Paul Reynolds] 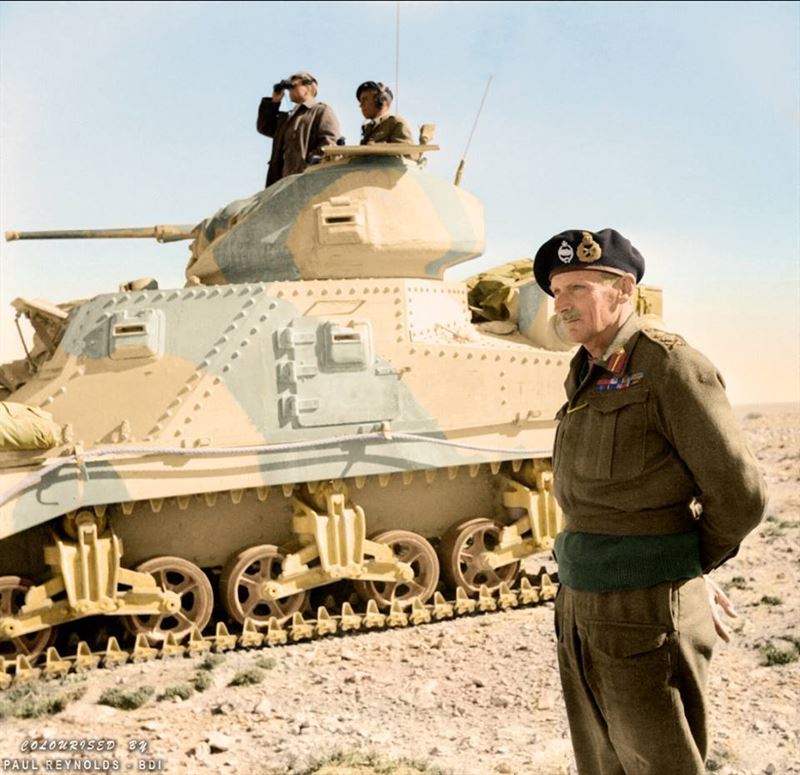 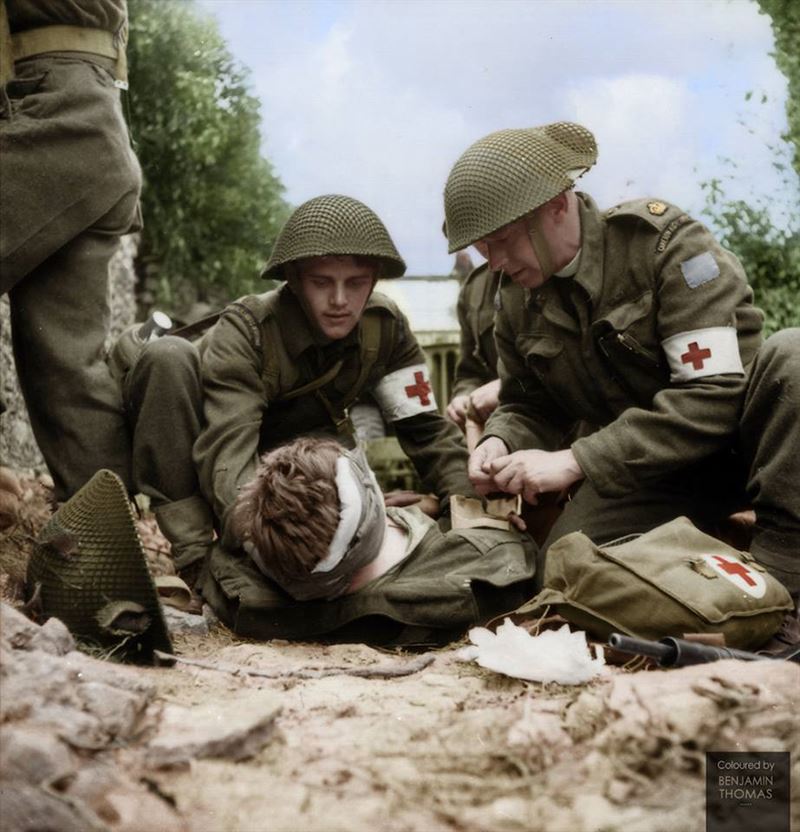 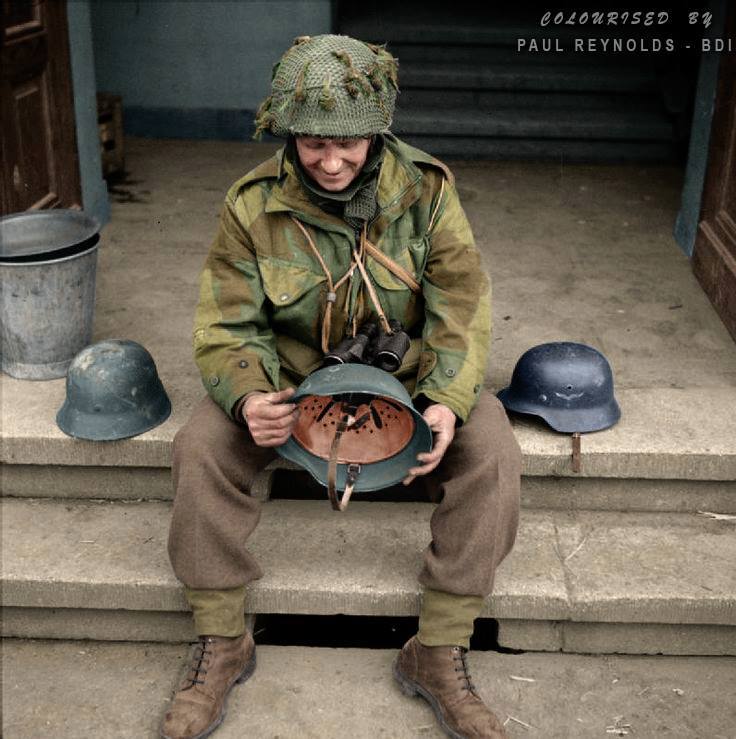 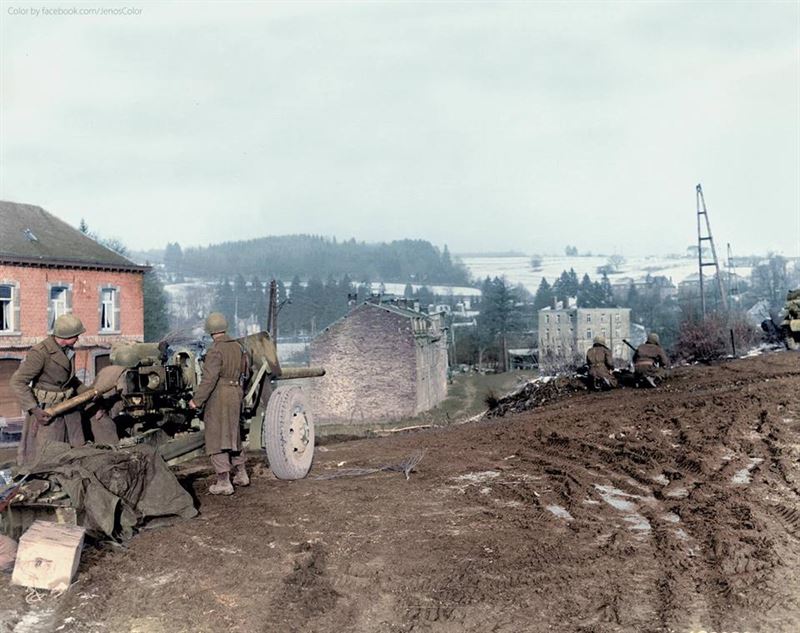 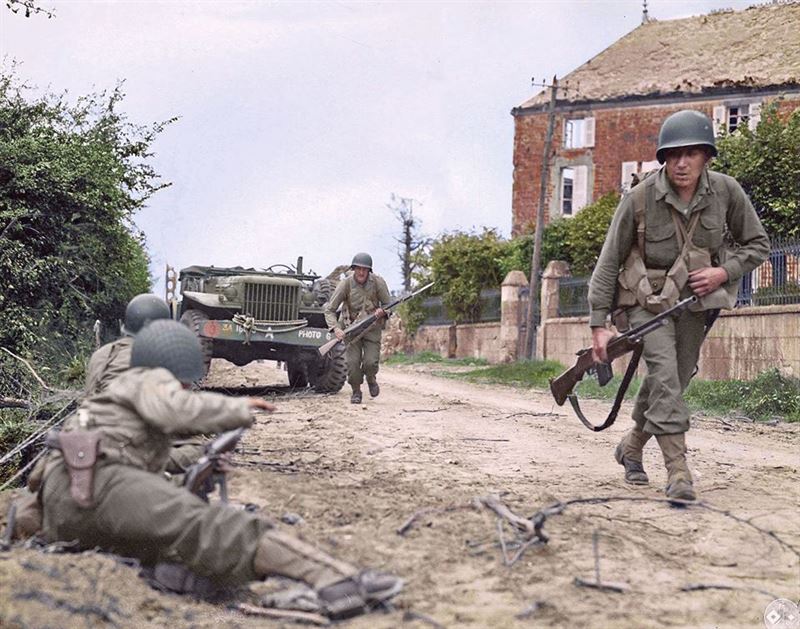 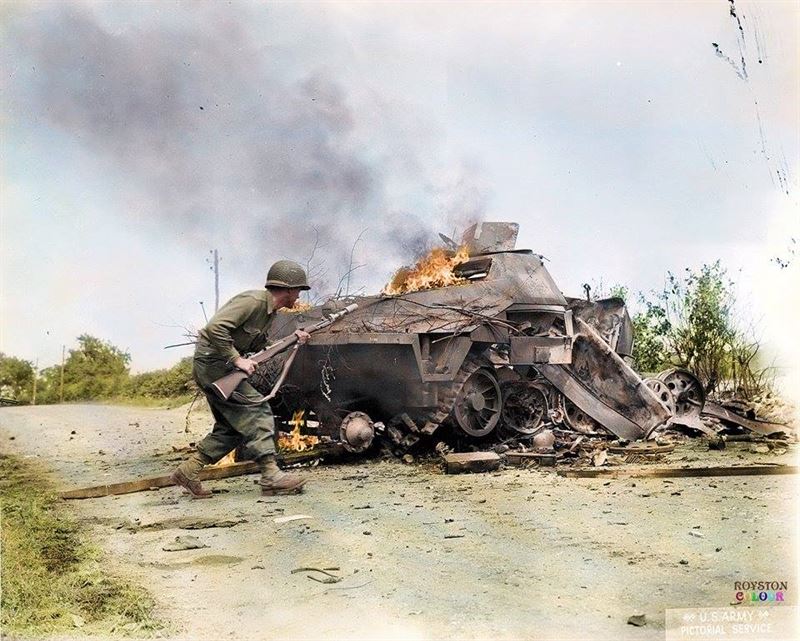 An American G.I. (possibly of the 79th US Infantry Division) runs past a German Sd.Kfz 251 Ausf D (SonderKratfahrzeug 251) – it’s probably one of many SPW (Schützenpanzerwagen) belonging to 2.Panzer Aufklärer (recon.), knocked out near St Aubin d’Appenai in Normandy during mid-August 1944. [Colorized by Royston Leonard] 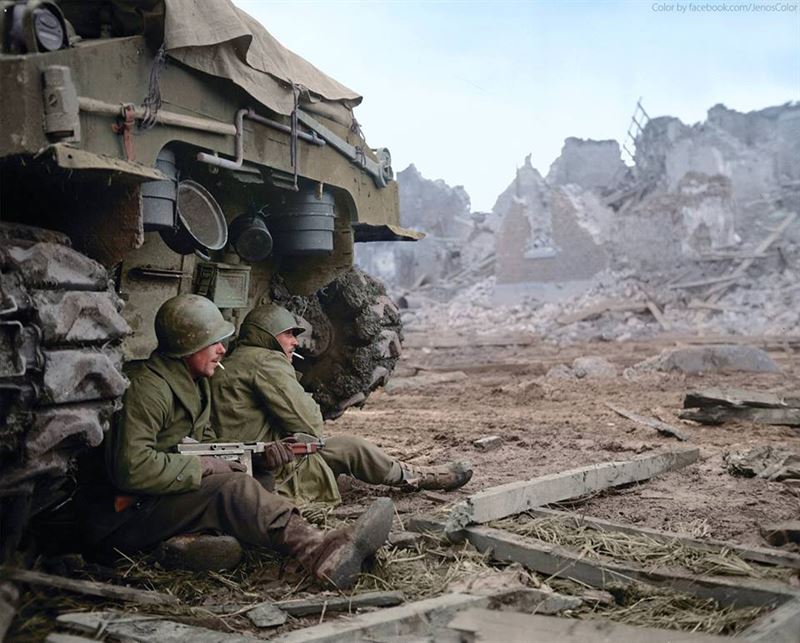