Military deception refers to attempts to mislead enemy forces during warfare. It’s usually achieved by visual deception, artificial fog of war, misinformation and various other methods. Military forces have used deception since the start of warfare in order to confuse or distract the enemy to prevent (more) casualties, hide movements or gain strategic advantage in order to achieve a tactical surprise and more. In the buildup for Operation Overlord in 1944, one of the largest deception operations, Operation Bodyguard, was executed. The operation ended in a success since it kept the German 15th Army in Calais and prevented its immediate deployment in the Normandy landings. However prior to Operation Bodyguard, the Allies already made extensive use of deception and so did the Axis.

The reasons why fake tanks were used were to (i) make the enemy think the opposing force had more tanks than they actually did, (ii) distract the enemy from where the real tanks stood and, or (iii) when real tanks were moved from their holding areas they were replaced with dummies, to let the enemy believe the tanks were still there.

Dummy tanks were made from various material and a few variations exist: (life scale) tank model made from wood, metal or wooden frame put over another vehicle (such as a truck or jeep) and (life scale) inflatable tank models. You’ll these variations below in the images provided. Although they look unrealistic from close-up, they were realistic enough in the heat of battle, if seen from a far distance or from an aerial view.

“No living man is there, but dummy men are grubbing in dummy swill-troughs, and dummy lorries are unloading dummy tanks, while a dummy engine puffs dummy smoke into the eyes of the enemy.”, Julian Trevelyan, a camouflage officer, after seeing an entire dummy railhead.

For those interested in World War II and (Military) Deception, there is a very interesting book out, called “The Ghost Army of World War II: How One Top-Secret Unit Deceived the Enemy with Inflatable Tanks, Sound Effects, and Other Audacious Fakery” which is highly rated and recommended. I think it’s one of the few books on this theme. 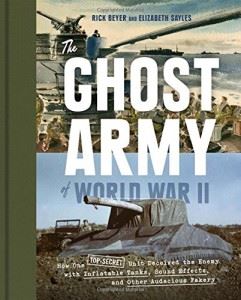 “The Ghost Army of World War II describes a perfect example of a little-known, highly imaginative, and daring maneuver that helped open the way for the final drive to Germany. It is a riveting tale told through personal accounts and sketches along the way—ultimately, a story of success against great odds. I enjoyed it enormously.” – Tom Brokaw

In the summer of 1944, a handpicked group of young GIs—including such future luminaries as Bill Blass, Ellsworth Kelly, Arthur Singer, Victor Dowd, Art Kane, and Jack Masey—landed in France to conduct a secret mission. Armed with truckloads of inflatable tanks, a massive collection of sound-effects records, and more than a few tricks up their sleeves, their job was to create a traveling road show of deception on the battlefields of Europe, with the German Army as their audience.

From Normandy to the Rhine, the 1,100 men of the 23rd Headquarters Special Troops, known as the Ghost Army, conjured up phony convoys, phantom divisions, and make-believe headquarters to fool the enemy about the strength and location of American units. Between missions the artists filled their duffel bags with drawings and paintings and dragged them across Europe. Every move they made was top secret and their story was hushed up for decades after the war’s end. The Ghost Army of World War II is the first publication to tell the full story of how a traveling road show of artists wielding imagination, paint, and bravado saved thousands of American lives.