You know your dad is too bad-ass for one more cute little coffee mug. Whether he’s a Civil War buff, fascinated with World War II, or a real-life veteran of the Vietnam War, he’ll truly appreciate the distinctive historical military and war gift ideas presented in this issue of Argunners. These thoughtful items include a variety of books, films, shirts, and collectible items that capture the era and notable moments from America’s most memorable wars and events. These gifts are perfect for war veterans, history buffs, and all-around patriots of the good ol’ U.S.A. from it’s slow and humble beginnings through each of the freedom-paving and blood-shedding moments in war. 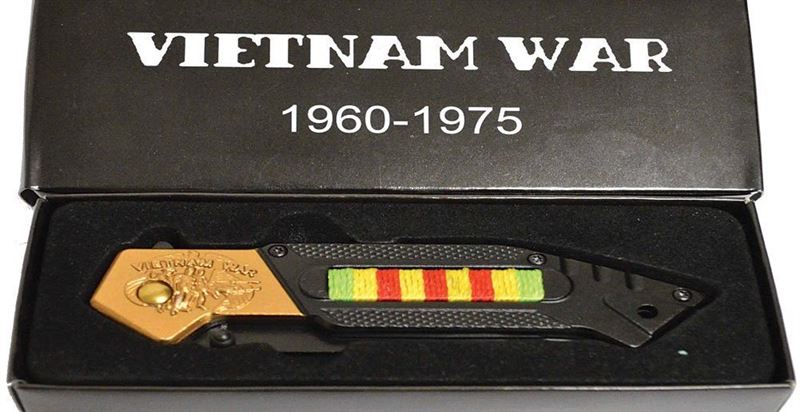 This commemorative folding knife honors all of the brave heroes who served in the Vietnam War. With a 3.5″ L black stainless-steel blade and a 4.75″ L handled with embroidered service ribbon and bronze-like embossed memorial art on the handle, this gift arrives in its own gift box for a great, last-minute father’s day gift or a shipped gift to a father who lives too far to visit in person.

This amazing game with 22 new unit sculpts, major powers, alliances, and maps will enthrall 2-8 players of all ages over 12 with hours of game-play. This never before released version of Axis and Allies is set in World War I featuring both the familiar and time-tested Ananda rules with adaptations allowing World War I buffs control of the armies of 1914. What a wonderful way to enjoy a classic favorite from the storyline of a poignant and historical time. 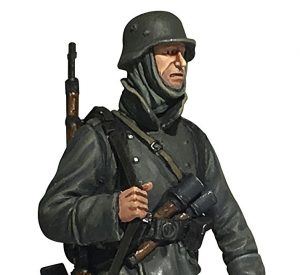 This 1:30 factory made and hand painted pewter statue of a World War II German 25048 Volksgrenadier Walking with his gear on his back and a look of solidarity upon his pale face comes already boxed in a decorative, padded gift box. 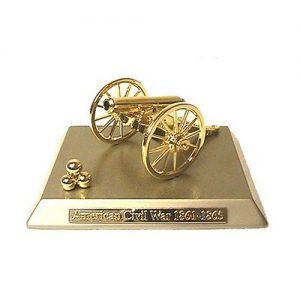 The Napoleon gun was widespread due to it was as good as its forerunners, but also light and mobile. With a solid shot, explosive shell, spherical case shot and canister, it would shoot well with a lethal effect. This solid 1 pound statue stands only 2″ high and 4.5″ long but looks fantastic on a desk as a paperweight or on a shelf amidst other Civil War collectibles.

This beautiful sword is a highly detailed, almost perfect reproduction of a Civil War Cavalry Officer’s saber. The overall length of the HQSS stainless steel sword is 36″ with a 29″ blade, fully wrapped guard, and highly detailed leaves cast into the steel. 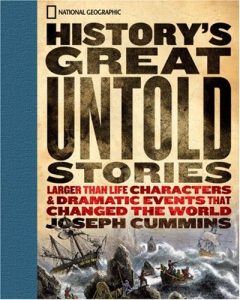 One amazing book that history buff dads of all eras will enjoy is History’s Great Untold Stories by Joseph Cummins. Your dad will enjoy several fascinating stories from the Spanish Armada to the anti-slavery movement in Great Britain that artfully set the stage for some of history’s greatest untold sagas. 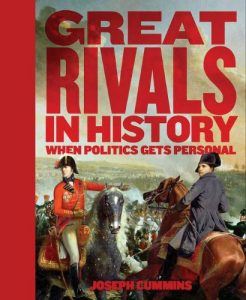 Twenty-four of the greatest rivalries that have sparked some of the most dramatic episodes in the history of the world are wonderfully detailed in Joseph Cummins’ Great Rivals in History. Researched incredibly well and utterly compelling, this book describes in vivid detail how the personal nature of politics motivated rivals to make profound decisions that forever shaped the course of history. Rivals include the religious clash between Mary, Queen of Scots and Elizabeth I, the battle for power between Benedict Arnold and Horatio Gates, and the struggle between Ernst Roehm and Adolf Hitler for control of the Nazi Party. 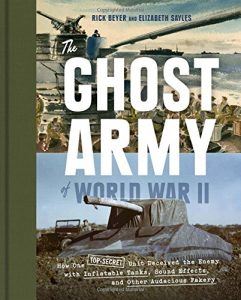 If your father is a World War II buff, he will love reading about the little-known yet daring maneuver of the Ghost Army of World War II. In the summer of 1944, a small group of young GI’s (including famed names such as Bill Blass, Arthur Singer, and Jack Masey) landed in France on a secret mission. They were armed with truckloads of inflatable tanks, a huge collection of sound effects records, and more than just a few tricks up their sleeves. The full story of how these men used their tricks and imagination to help open the way for the final drive to Germany was untold for decades after the war’s end and will leave your World War II loving father spellbound until the last page. 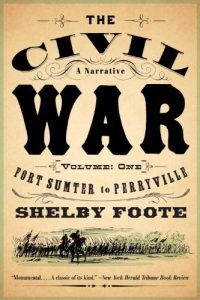 This first volume of Shelby Foote’s classic narrative of the Civil War opens with Jefferson Davis’s farewell to the United Senate and ends on the bloody battlefields of Antietam and Perryville, as the full, horrible scope of America’s great war becomes clear. Exhaustively researched and masterfully written, Foote’s epic account of the Civil War unfolds like a classic novel.

Focused on the pivotal year of 1863, the second volume of Shelby Foote’s masterful narrative history brings to life the Battle of Gettysburg and Grant’s Vicksburg campaign and covers some of the most dramatic and important moments in the Civil War.

This final volume of Shelby Foote’s masterful narrative history of the Civil War brings to life the military endgame, the surrender at Appomattox, and the tragic dénouement of the war—the assassination of President Lincoln. 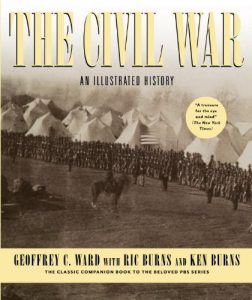 It was the greatest war in American history. It was waged in 10,000 places—from Valverde, New Mexico, and Tullahoma, Tennessee, to St. Albans, Vermont, and Fernandina on the Florida coast. More than 3 million Americans fought in it and more than 600,000 men died in it. Not only the immensity of the cataclysm but the new weapons, the new standards of generalship, and the new strategies of destruction—together with the birth of photography—were to make the Civil War an event present ever since in the American consciousness. Thousands of books have been written about it. Yet there has never been a history of the Civil War quite like this one. 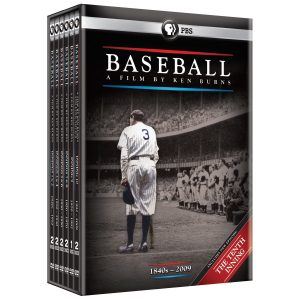 For the father who loves history, it is difficult to ignore the allure of baseball’s humble beginnings. This absolutely fantastic treasure trove of baseball history breaks down important points in baseball’s story into innings, including the special extra tenth inning. The author delves deep into discussing several important players and issues and uncovers a few little lesser-known treasures. Whether you father loves history, sports, or both, he’ll appreciate seeing this film. 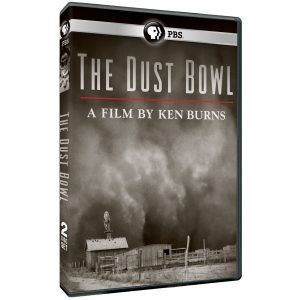 The Dust Bowl, by Ken Burns, chronicles the worst-ever man-made ecological disaster that has ever faced America. This 193’s disaster occurred when a decade-long drought followed a frenzied wheat boom in the southern plains and nearly eradicated the breadbasket of the nation. This four-hour, two-episode documentary series is a tale of morality about the delicate relationship that we have and must protect with the land that sustains us. 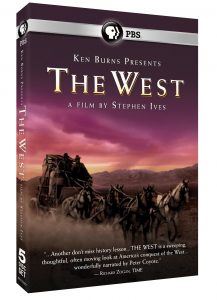 For the father who loves the draw of the West, Stephen Ives describes in vivid detail the American West, stripped of all of its Hollywood mythology, this panoramic documentary with the most intense drama and heroes and villains that are larger than life. This series of five discs portrays the full impact that the influx of white settlers, adventurers, explorers, and exploiters had on the Native Americans and the land. 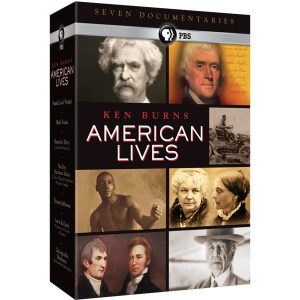 If your father loves biographies, then he will adore this award-winning documentary by Ken Burns. The American Lives Collection is a compilation of 10 discs and including seven outstanding biographies as well as dramatic stories of some of America’s most beloved pioneers and celebrated historical events, including Lewis & Clark, Thomas Jefferson, Frank Lloyd Wright, Susan B. Anthony, and Mark Twain. 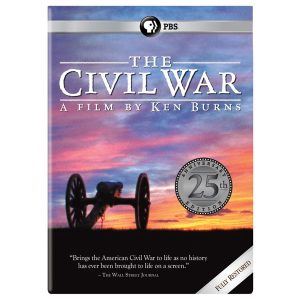 Ken Burns’ Emmy Award-winning documentary, The Civil War, is the saga of celebrated generals and unknown soldiers, in a brought-to-life story of America’s most destructive and defining conflict. If your father is a Civil War buff, he will sit through this beautifully renditioned story of a heroic and transcendent president of a country that had to divide itself into two halves before it could become whole.