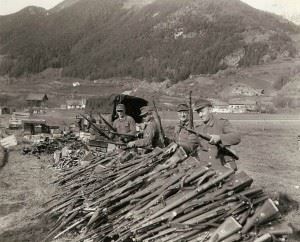 “End of the Line” General Palmer remarked. The surrender of the 19th Army. The end! With the final capitulation of Germany to the Allies, German soldiers who have bore arms for over five years against almost all of Europe and the U.S., surrender their rifles to their American conquerors near Landeck, Austria. They seem happy that it is all over. Hand grenades and other equipment can be seem piled up beyond the rifles.