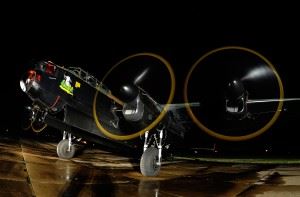 The Royal Air Force Memorial Flight’s Lancaster PA 474 undertakes a night engine run in preparation for the 2013 commemoration of the 70th anniversary of the Dambusters raids of World War 2.

Painted with the nose art of 617 squadron’s Thumper Mk III, this aircraft, the only flying example of its type in Europe and will retrace the training missions flown by 617 Squadron crews over the Derwent Dam in May 2013.