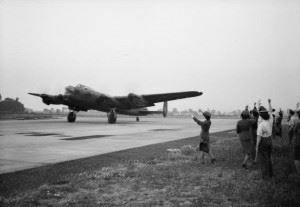 WAAF and other ground crew members wave off Pilot Officer W H Eager RCAF and his crew in Avro Lancaster B Mark I, W4236 ‘QR-K’, of No. 61 Squadron RAF, as they begin their take-off run from Syerston, Nottinghamshire, for a night raid on Hamburg, Germany. This was W4236’s 74th mission, from which it returned safely: it was lost, however, during a raid on Mannheim on 10 August 1943.