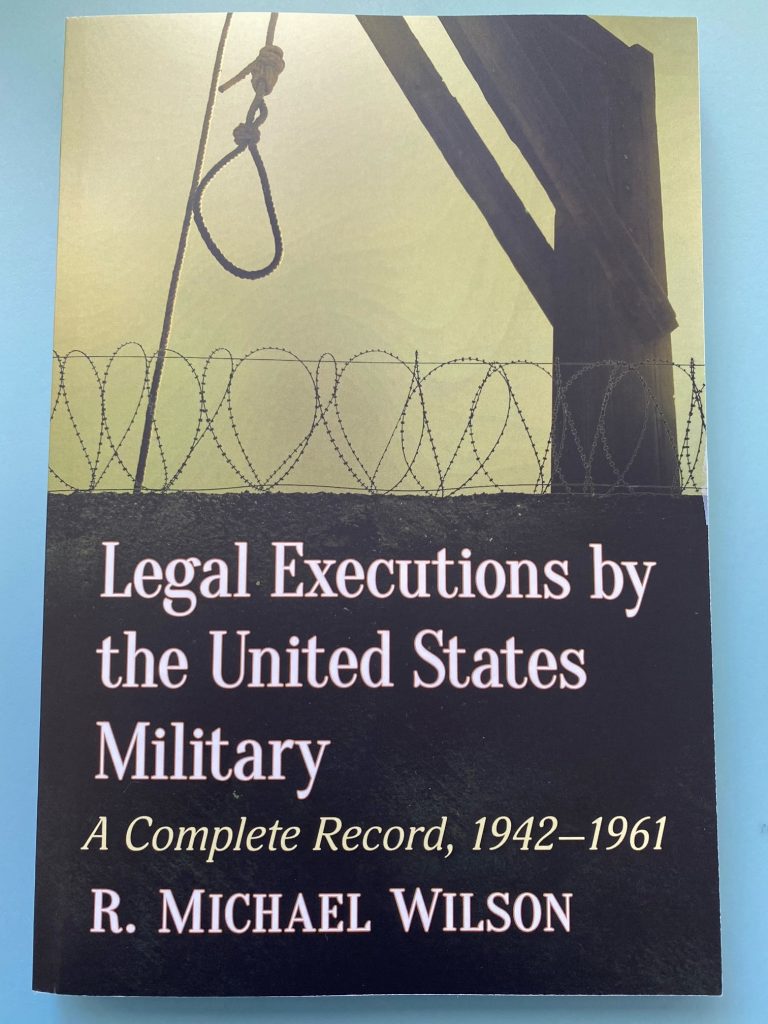 Being there . . . . to support this reviewer dealing with one of the most unpleasant American
military matters of World War II: following General Court Martial sentences of death,
executions of our own boys under the Uniform Code of Military Justice (UCMJ) Articles of War
24, 58, and 92, or 93 . . .
During the 20 years following entry into World War II, nearly 30 million men and women served
in or worked for the United States military. Tens of thousands faced general court-martials
under the Articles of War which prescribed for the condemned either life in prison or death for
crimes of murder, rape, or desertion. Only 160 men were sentenced to death and executed –
159 for murder or rape, or a combination of the two, and one for desertion. The manner of
deaths was by firing squads or by hangings. The dishonored servicemen were buried in various
locations around the world. Later, nearly all were disinterred and moved to grave sites in
military cemeteries, segregated from those who died honorably. Below is a recently published n
book which tells the tragic stories of the men, their crimes, and their executions between 1942
and 1961.
SAD CASE HISTORIES OF 160 AMERICAN SERVICEMEN EXECUTED IN WORLD WAR II
“Half the world’s countries have abolished the death penalty, but in the United States the
administration of the death penalty persists as one of the most controversial ethical and
practical issues of American jurisprudence. Capital punishment has been under attack in
America for over a century and one day may become a relic, the details to be found only in
those literary museums known as historic encyclopedias,” writes author R. Michael Wilson, a
retired law enforcement officer who has penned numerous books on crime and capital
punishment. Of course, this leading expert on American military death sentences asks that
readers reflect upon the case studies presented here and form their own opinions on Articles of
War 24, 58, and 92. A hint of the author’s persuasion – – his seven-word dedication of the book:
“To those most often forgotten, the victims.”

“LEGAL EXECUTIONS BY THE UNITED STATES MILITARY – – A Complete Record, 1942 – 1961”, by
R. Michael Wilson. McFarland & Company, Inc., Publishers; 2022, 258 pages, sc; $28.95. Visit,
www.mcfarlandpub.com.
Yes, 160 times an American son, father, uncle, brother, neighbor sentenced to die met his
executioner, but more often the sentence was commuted to prison or vacated. The manner of
death was by musketry (firing squad), or by hanging, and the procedures for conducting either
execution were dictated in precise detail by military documents and orders. The crimes which
resulted in an execution were limited to the most heinous: rape, murder, and the one
deliberate desertion. Pages 4 and 5 of the Introduction describe in detail the procedures for
conducting executions. All are officially adopted, formally recognized, and faithfully followed —
see “Procedure for Military Executions, War Department Pamphlet 27 – 4”.

On a personal note of transparency, this reviewer, upon retirement from college and graduate
school instruction, chose post-employment work as junior and high school teacher with the
California Department of Corrections and Rehabilitation at San Quentin State Prison on the
northern shore of San Francisco Bay. Then, promoted to Supervisor of Recreation for 6,000
inmates, I often found myself among the 750 condemned, once, or twice a week delivering
sports equipment and recreational supplies to six small open-air yards, in addition to chairing
the Death Row Movie Committee. Then, as today, two thoughts haunt me: one from Recreation
Inmate Clerk, Q. Tham, a lifer, “All they needed after being born was being wanted, being loved,
and played with as little boys, respected as young individuals with purpose leading to authentic
identities. Armed with those, and not guns, not a one would have killed”. Inmate Clerk, Orlando
‘Duck’, my other clerk, also a lifer, but fortunately recently paroled, said, “Look, coach, never
forget that not one of those guys at the age of three or four said, ‘I can hardly wait to grow up
to rape and kill.”
Readers, I don’t know why, but I thought you should know the above about your reviewer who
forced himself to tackle R. Michael Wilson tough book. Ultimately, it boils down to this: of
course, you don’t need any help making up your own mind about capital punishment.
Nonetheless, how does one dismiss R. Michael Wilson’s reverent, heartfelt-genuflecting
dedication of his emotional-provoking book, “To those most often forgotten, the victims.”?
Yet, some of the nicest men I have known, I met as my students and athletes at San Quentin, a
few on Death Row . . . . .