Argunners Magazine has the privilege to publish a selection of photographs from Gerald Trevor Roberts’ archive, who served in the Royal Air Force (RAF) during World War II.

After World War II had ended, he was transferred to the former Luftwaffe airfield of Lübeck – Lübeck Airport is now a minor German international airport–, where he served as a instrument repairer on RAF Aircraft for the 124 Wing. With his camera, he captured some great images of various Allied and German planes including the Messerschmitt Me262, Gloster Meteor, Dakota’s, Focke-Wulf 200 and many more…

Captions are either his or were provided by his son John and various aviation specialists. All photographs credits belong to Gerald Trevor Roberts. 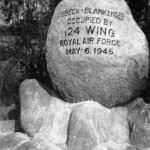 Picture (left): “The day after the end of the war, we reached Lübeck. Lubeck-Blankensee was a big airfield that had been used by the Luftwaffe. At the entrance there was commemoration stone, recording its opening by Hitler in 1939. This was scratched out and replaced by ‘Occupied by 124 Wing, Royal Airforce, May 6 1945′. At the further end of the airfield, the Russian Zone began.”

Not only it are amazing photographs of history, they also come with extraordinary stories. 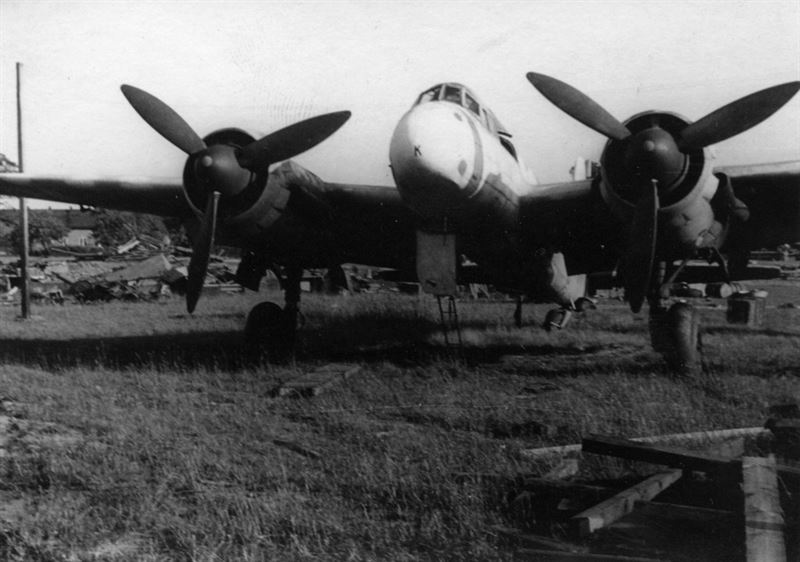 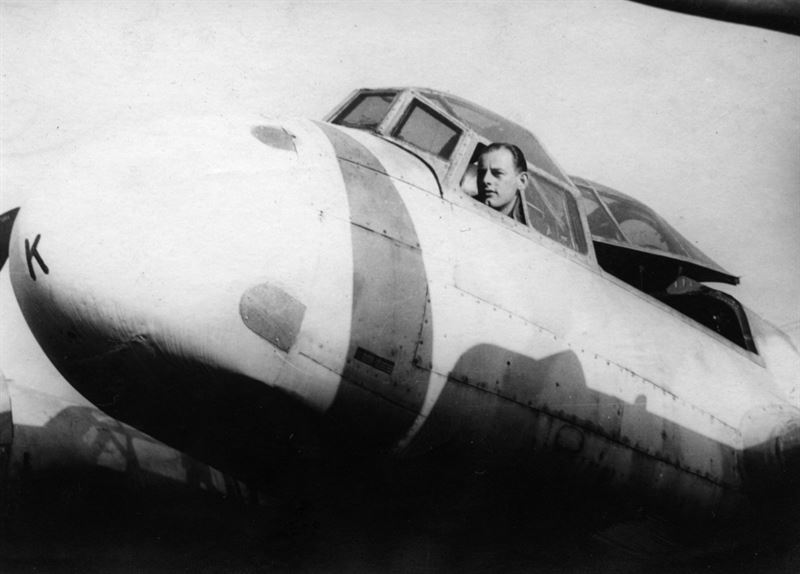 “Just another Ju88.” From Trevor’s notes:

“One day volunteers were called for, to see in some German aircraft that were being surrendered. I thought it sounded interesting and volunteered, along with about half a dozen others. The aircraft were a squadron of Junkers 88 (bombers) and they were being flown in by Luftwaffe pilots, from Stavanger, Norway. The planes had been told to place on board as many spare parts as possible and then fly, fully armed, at no more than 500 feet, along an air corridor patrolled by Spitfires.

One Luftwaffe pilot landed his aircraft and looked to the sergeant for instructions. Misunderstanding the answer, he switched off. The sergeant yelled at him to turn the engine back on – the aircraft had to be moved. The Junkers were coming in one after the other and the next one was rapidly approaching. The pilot threw up his hands – ‘Battery Kaput’ . It was stuck in the middle of the runway. Everybody jumped from the aircraft – there were about 10 or 12 on board, as the planes were also carrying their ground crews. Divisions were rapidly forgotten as we and the German crew got together and managed to push the bomber to one side of the runway, and the next plane landed safely.

After landing, the German crews had to throw down their sidearms, and were then booked in. The planes were kept in operational order for a while. Then, when the situation regarding the Russians had settled down, the propellers were taken off. Several months later they were all blown up.” 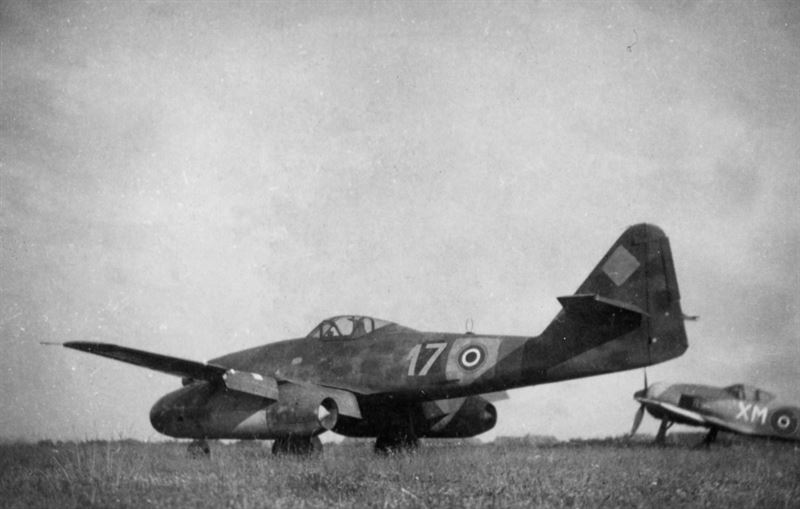 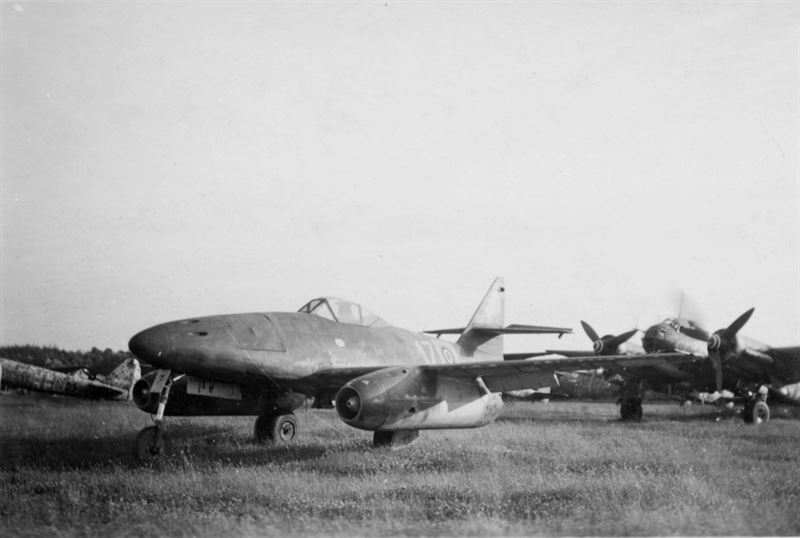 “A jerry jet plane. Me 262. One bombed us at Helmond. Lubeck. June ’45”. This Messerschmitt Me262 was captured on the ground at one of the ex-Luftwaffe bases Dad was based at before Lübeck – perhaps Eindhoven. It was decided that 124 Wing wanted to take it with them, so the roundels were painted on and a brave RAF pilot spent the morning taxiing up and down until he had the hang of the jets. He then took off boxed in by the wing’s Typhoons to prevent it being ‘bounced’ by other allied aircraft. No doubt the Typhoons were flat out and the Me 262 throttled well back! 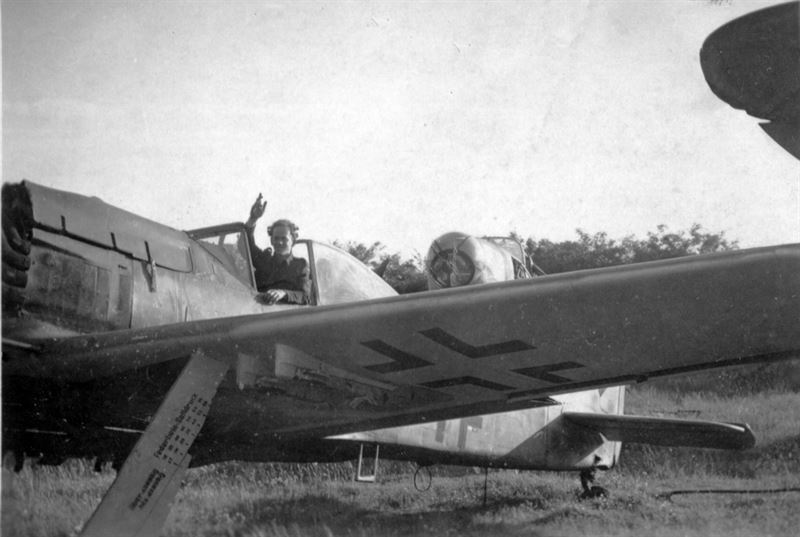 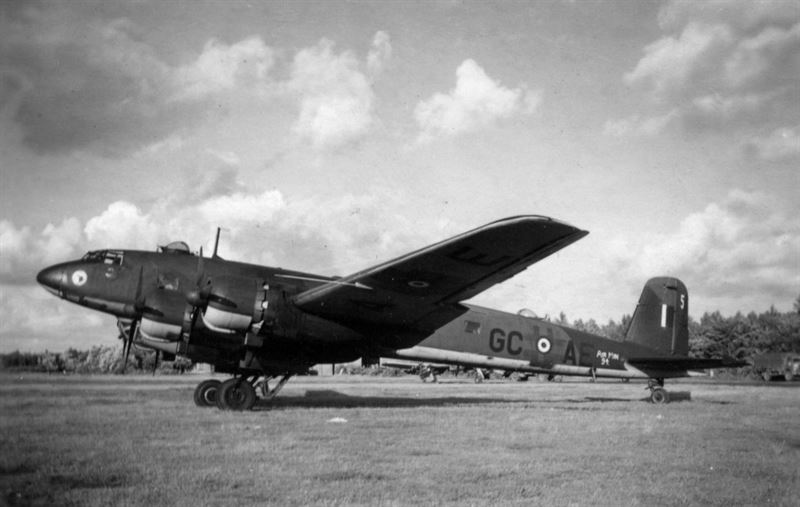 “Focke Wulf ‘Condor’. 4 engined German bomber that used to be used in the Atlantic to attack our shipping. Lubeck July ’45” According to Luftwaffe specialists this aircraft had been Heinrich Himmler’s personal aircraft before being captured by the British and taken under the wing of the Air Ministry. 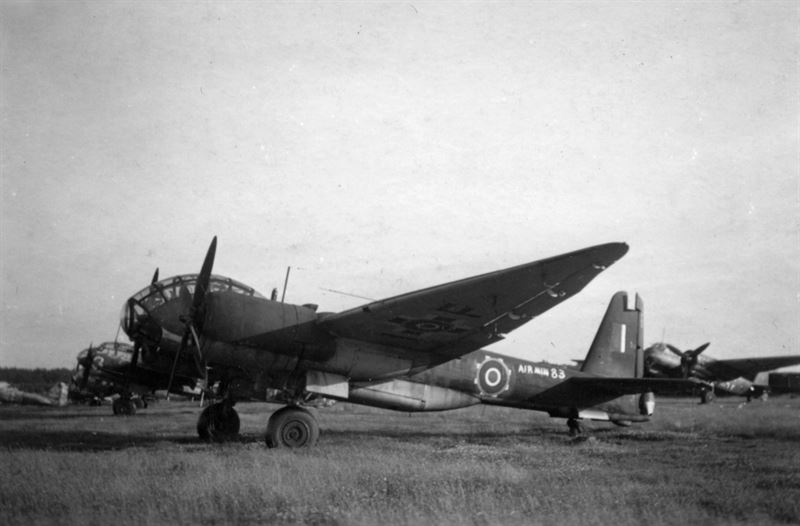 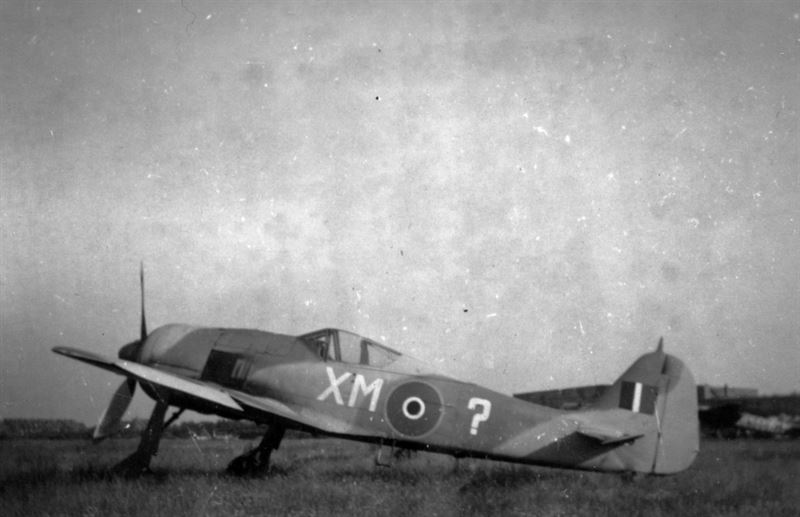 “The FW190 that surrendered to us at Hannover before the end of the war. Lubeck. June ’45.” According to Tony O’Toole: “Focke Wulf FW190A-8, coded XM-? was flown by 182 Sqn which usually flew Typhoon`s from Lubeck in the summer of 1945. Quite a few FW190`s were made airworthyby the RAF at Lubeck as this had been a major Luftwaffe repair centre for the type and this one wears RAF camouflage of Ocean Grey and Dark Green over its previous German colors.” 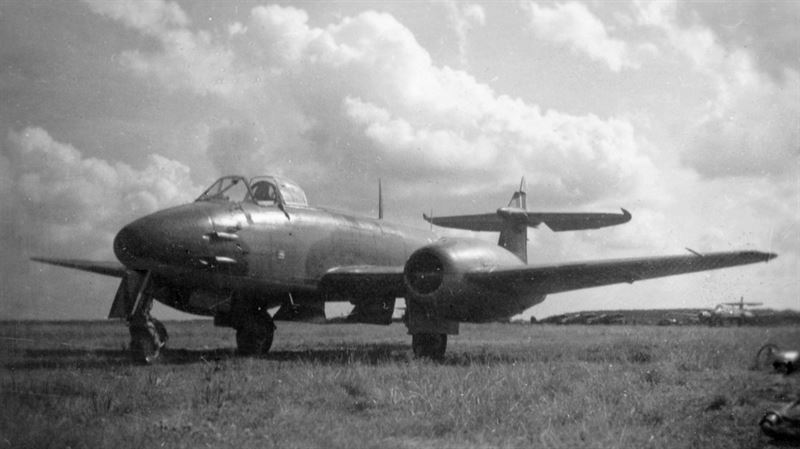 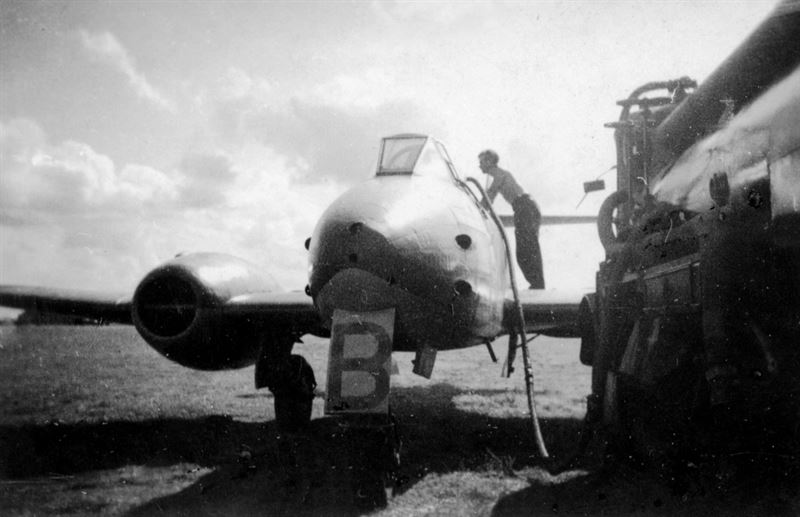 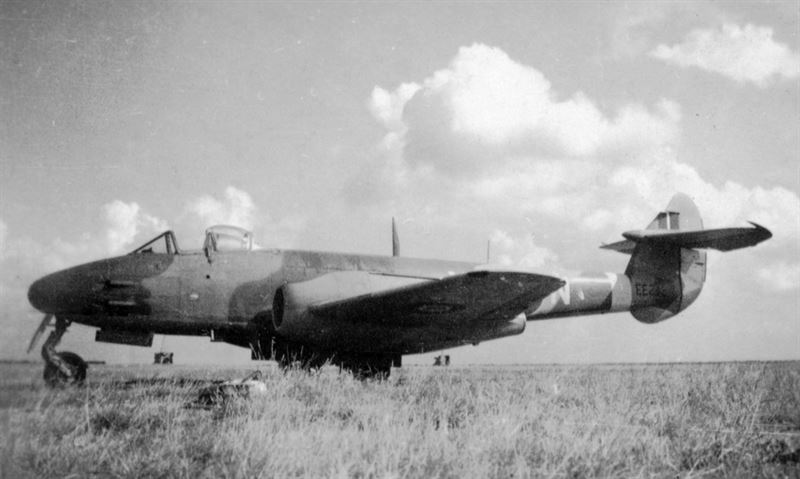 Gloster Meteor, a RAF Aircraft, at Lübeck, probably in June 1945. 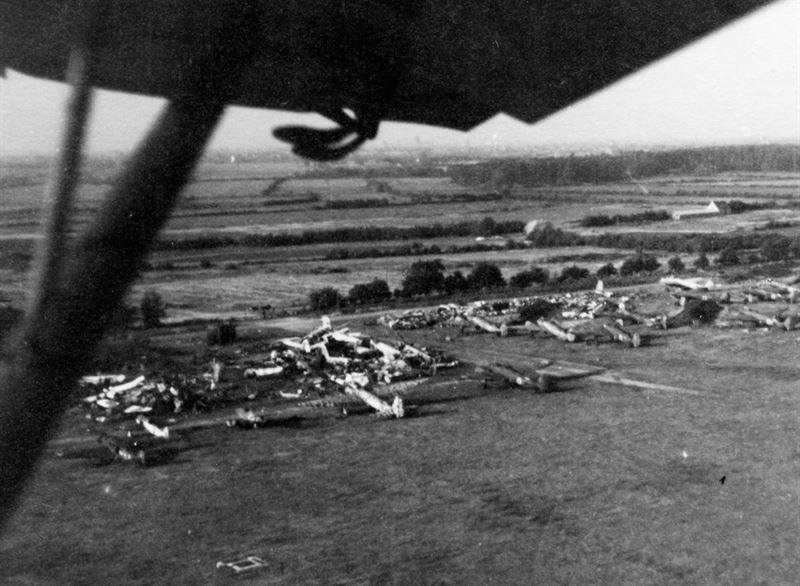 At one end of the airfield many German planes were parked. Some of these had been captured as the squadron moved through Holland, but they also included aircraft from the Luftwaffe in Scandinavia. They had surrendered a few days before the end of the war so they could avoid being captured by the Russians. Their ground crews had come over in the bomb bays.

My Dad told me that the pilots were detained but the ground crews we given the freedom of the base, so that the planes were kept operational for the next year just in case the war continued against the Russians, according to John. An ME262 can be seen amongst the parked German aircraft. 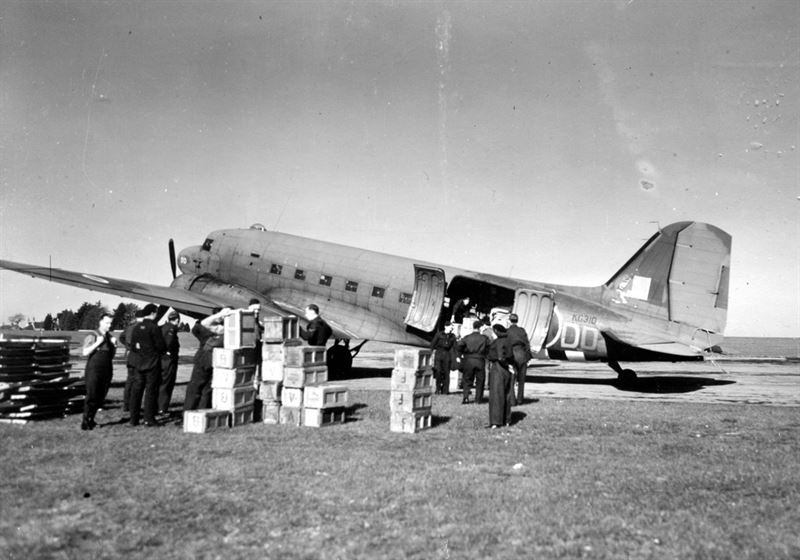 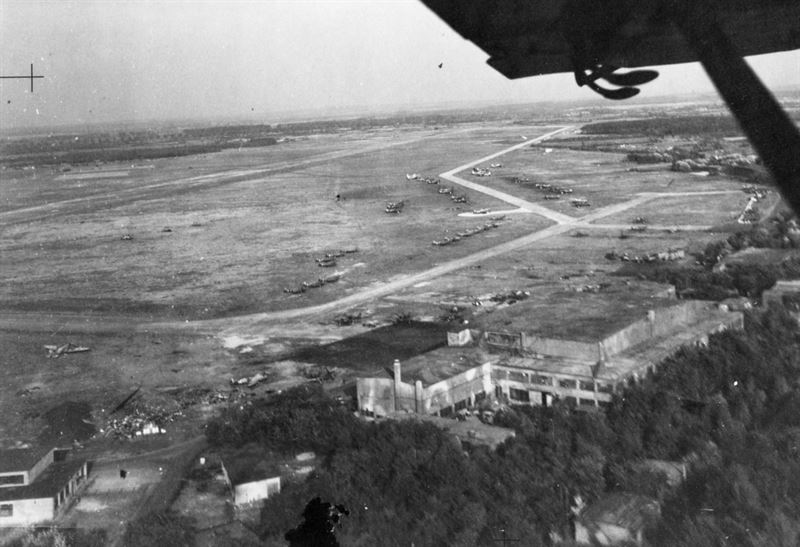 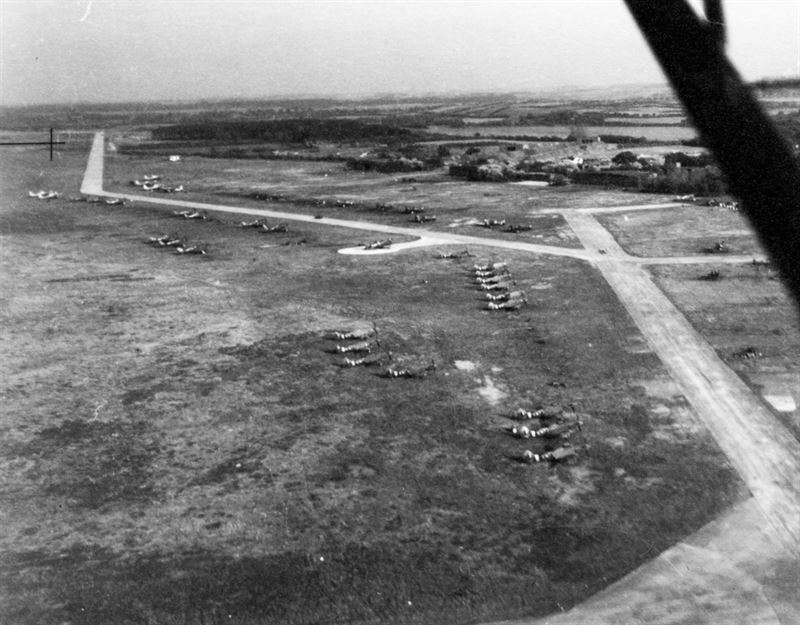