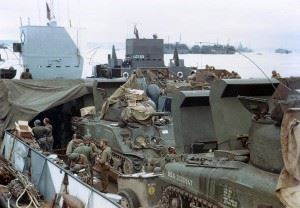 U.S. Army M4 “Sherman” tanks of Company A, 741st Tank Battalion and other equipment loaded in an LCT, ready for the invasion of France, circa late May or early June 1944. One tank has a welded hull. The other (marked “USA 3036947”) has a cast armor hull. Both have extended air intakes for operations in water. Note the markings “1A-741Δ” (“First Army – 741st Tank Bn”) on the trailer are consistent with what should be found on a 741st vehicle. USS LCT-213 is tied up alongside and several LSTs are anchored out in the harbor of this southern English port.