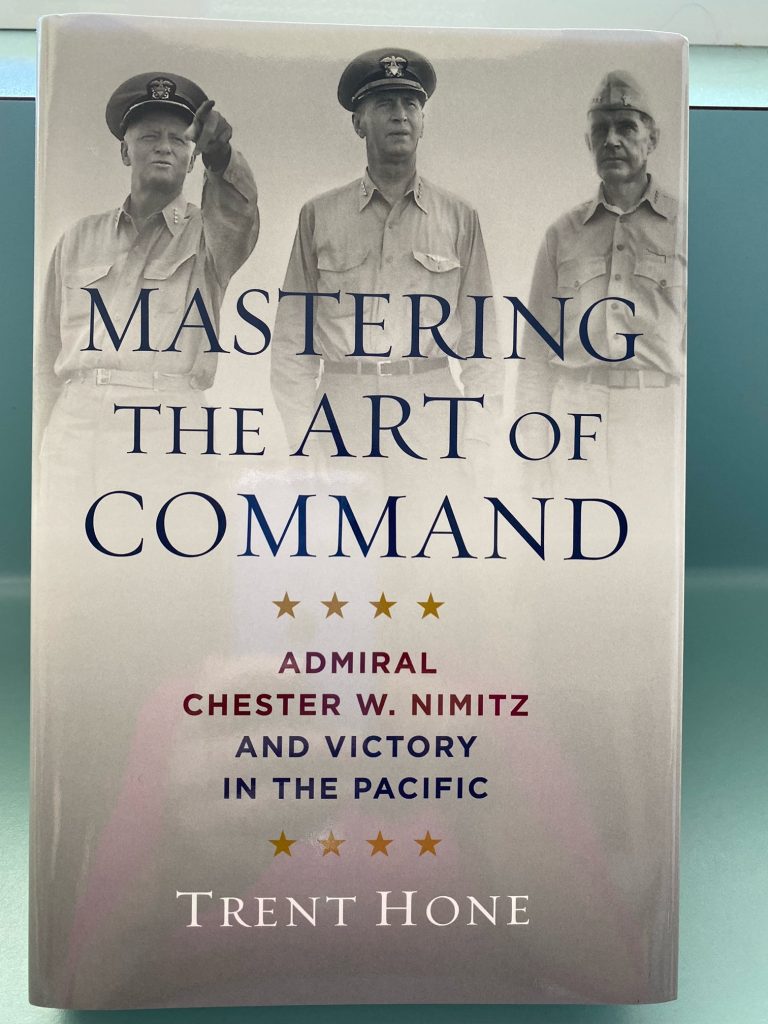 Being there . . . . to meet, greet, and familiarize yourself with one of the few true actualizing sea
battle strategic minds in our naval history, a quiet, humble, unassuming man who stepped
forward when America at war urgently, nay, desperately, needed such a nonpareil paragon.
As an example of his fierce bravery and matchless resoluteness, read a quote a Marine Corps
historian educed from him: “The presence of strong Japanese units in the area west of the
Marianas, possibly their entire fleet, indicates the possibility of a major sea engagement.
Unfortunately, we do not control their movements. If I did, then there would be a fight. We go
on the assumption they will bring out everything they can muster. We provided our Fifth Fleet
with enough muscle to make any decisive engagement favorable to us. We hope the big
Japanese boats will stay in the area and give us a chance to get at them. I don’t know anything
more we can do to provoke fleet action. We have already attacked their key position in the
western Pacific. And we will continue to do so, day in and day out, until victory is ours . . .”
Echoing the exemplary courage of Nimitz, author Trent Hone, the incomparable authority on
the U.S. Navy of the early 20 th Century, writes in the final paragraph of his latest classic (see
below), “Nimitz was able to perform ‘as close to perfection as human limitations permit’
because of the collaborative environment he fostered, the trust he created, and the sense of
unity he brought to the Pacific fleet and the Pacific Oceans Areas. He is an example that is
worthy of study and emulation.”
“THANK GOD, ALMIGHTY, CHESTER IS IN COMMAND!” was the U.S. Navy cry throughout the
Pacific on December 17, 1941 – – ADMIRAL CHESTER W. NIMITZ, COMMANDER-IN-CHIEF,
PACIFIC FLEET (CINCPAC); COMMANDER-IN-CHIEF, PACIFIC OCEAN AREAS (CINCPOA); FLEET
ADMIRAL – “WHO BETTER? WHO?”
At the close of the disastrous year in 1941, President Roosevelt chose Nimitz over many
possible candidates for the highly coveted position of Commander-In-Chief of the Pacific Fleet
(Cincpac). It was on the tenth day after Pearl Harbor. He was also promoted to the rank of
Admiral of the Fleet, the highest position in the American Navy. Officer staffs of the U.S. Navy
who knew and loved the admiral knew upon that announcement, on that very day, Japan had
lost World War II in the Pacific.
Chester Nimitz, who didn’t show it, was disappointed, quietly reluctant to accept the position
because he yearned for a seagoing command. Meanwhile, in the halls of the Navy Command
Center at Pearl, morale soared within minutes of the announcement. Three and half years later,
and the war won, with 636 officers, 5,000 ships, and over 16,000 carrier aircraft under his
command, the C-in-C who turned the Pacific tide, who revenged Pearl Harbor, who was grateful
there would be no invasion of Japan, was continually approached by public media
correspondents essentially asking the first same question, “YOU? Can it be little YOU who made
this all happen?” They expected brawn and boasting, a dynamic bellower punching the air with
his fists. Instead, a calm, quiet thin man stood before them with an engaging, gentle smile, a
relaxed demeanor, courteousness in speech, tow-colored hair turning white, blue eyes and pink
complexion, with a slight Texas drawl adding to the ordinary simplicity of his Lone Star state

upbringing. Yes, reader, BE THERE, to meet one of great ones of our nation’s history. And to do
so, begin by reading,
“MASTERING THE ART OF COMMAND – Admiral Chester W. Nimitz and Victory in the Pacific”,
by Trent Hone. Naval Institute Press: 2022, 431 pages, hc; eBook edition also available. Visit,
www.usni.org
Trent’s brilliant effort is a detailed examination of the Admiral’s leadership in WWII. Following
the attacks on Pearl Harbor, Nimitz and his forces gained the initiative through victories at
Midway and Guadalcanal. Once they held the advantage, they maintained it through offensive
campaigns of unparalleled speed that overcame Japanese defenses and created the conditions
for victory.
First, the C-in-C revised and adapted his organizational structure to capitalize on lessons
learned in a rapidly changing battle theater. Hone argues that Nimitz – because he served
simultaneously as CINCPAC as CINCPOA – was able to couple tactical successes to strategic
outcomes and more effectively plan and execute operations that continued to bring victories in
the Marshalls, the Philippines, Iwo Jima, and Okinawa. Building upon the approach in this
award-winning “Learning War: The Evolution of Fighting Doctrine in the U.S. Navy, 1898 –
1945”, this gifted author explores the challenge of leadership in complex adaptive systems and
reassesses the inevitability of Allied victory. A new narrative history of the Pacific War, it is a
ground breaker that demonstrates how Nimitz maintained coherence within his organization,
established the conditions for his subordinates to succeed, and fostered collaborative sense-
making to pursue options more rapidly.
In short, Nimitz’s “strategic artistry” is a pattern worthy of study to emulate for today’s military
officers, civilian leaders, and managers in large organizations. If the reader has any knowledge
or feeling about this great, neglected Hero of America, read Trent’s “MASTERING THE ART OF
COMMAND”. Quite literally, you’ll darn near come to worship Chester Nimitz as much as this
reviewer has.