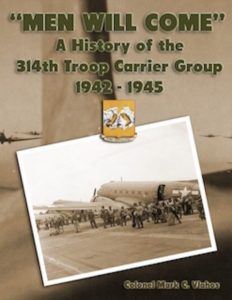 Mark Vlahos has produced a meticulously researched, well-told history of troop carrier operations in the Second World War. His book, Men Will Come, is not a general overview of the development and employment of troop carrier units, but rather the story of one specific Group. That being said, the exploits of the 314th Troop Carrier Group (TCG) cover the gamut of American involvement in the European Theater of Operations (ETO). The 314th TCG dropped paratroopers and towed gliders during every major airborne operation in the ETO, from Sicily through Italy, the D-Day invasion of France, Holland, and the jump across the Rhine into Germany. Anywhere American airborne forces fought in Europe, the 314th brought them to the leading edge of the battle.

Such an impressive combat record requires demands a big book to tell the tale. Men Will Come delivers, coming in at just over 504 pages from the forward to the index. While some readers might find the size intimidating, the author makes tremendous use of the space. Nearly every page includes photographs of aircraft and crews, plane schematics, maps, reproduced mission reports, and a host of other primary research.

Many books discussing military operations suffer from a lack of maps to orient the reader to the action, but Vlahos not only includes sufficient graphics, but he provides them next to the relevant text, so the reader does not have to page back and forth between a separate collection of maps and the relevant section of the text.

While such a rich collection of illustrations Lieutenant Colonel Clayton Styles, 314th Troop Carrier Group (right) with President Roosevelt and supporting documents enhances the reading experience, the heart of the book lies in the stories of the Group and its members. Vlahos ably allows the men to tell their own stories, relying heavily on diaries, oral histories, and memoirs to describe training, missions, and living conditions as the war progressed. He effectively blends the precise details of the official documents with the recollections of the aviators to create a vivid picture of air operations. The descriptions of risks taken to carry paratroopers and glider-men into combat, the heavy damage and losses sustained, and the bonds formed between crew members make for engrossing reading.

The book is organized with the reader in mind. As mentioned above, the maps are located where the reader needs them to clarify the text, but footnotes also appear on the relevant pages, rather than grouped as endnotes. Detailed appendices offer supplemental information for those interested in greater details. The book also contains an excellent bibliography and photos fill the majority of the pages.

Men Will Come is more than a coffee table book. Serious students of The Second World War will appreciate the amount of information it contains, especially those researching airborne operations or the Army Air Force. The book also contains much to entertain and inform general readers looking to better understand a little known studied aspect of the Air War in Europe. While it is a delight to page through, it is worthy of close reading and detailed study.