What are Military Tanks?

Tanks are armored vehicles that are capable of withstanding a lot of heavy machinery utilized on the battlefield. Tanks are a key component of any land warfare.

What was the First Tank used in War? 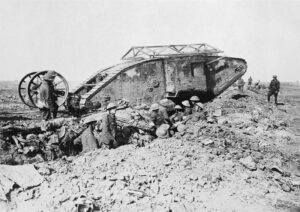 The British Mark I was used in 1916. It was placed into operation by the British during the Battle of Flers-Courcelette (Somme) in 1916.

As you can see from the photo, this tank looks nothing like the military tanks we use today. It has an odd shape with the armament on the sides of the tank versus all around it. You can see on top, there is a metal frame used to deflect grenades and at the back of the tank. Wait, what is the back? Just kidding, the back of the tank has a steering tail attached. Whenever the tank driver needed to turn this machine, they would use the steering tail to help with slight maneuvers.

Which Country has the Most Military Tanks?

The top five countries with the most tanks are shown below. Keep in mind, this is only an estimate as most governments aren’t going to willingly provide this kind of information.

In order of guestimated (made this word up) rank:

China may have more tanks than the United States, who knows.

There were numerous tanks used in World War I which happened between 1914 and 1918. We already discussed the first military tank used, now lets talk about some others. 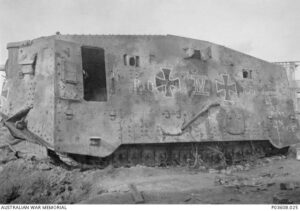 Germany built a tank and used it in 1918. As you can see, this tank evolved from the first tank in 1916. This tank was built as a result of Germany capturing both British and Russian tanks. The spoils of war led to Germany building a more advanced tank. Daimler provided the engine for this tank, hard to believe a 4 cylinder pulled this behemoth.

The tank was very fast, but got stuck often due to the way it was made.
France Saint-Chamond 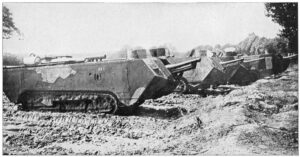 In the photo you can similarities in the first British tank and the French tank, but definitely some obvious changes.
The french military tank was first sighted in 1917. You will notice that the tracks on this tank are really short, and is considered a poor design.

World War 2 (WW2) lasted from September 1, 1939 until September 2, 1945. The British introduced the first functioning tank during WWI, now they have evolved very much during WWII. 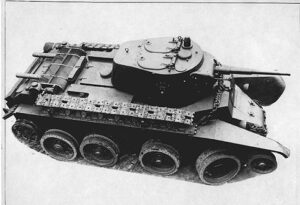 The Soviet Union had more tanks during WWII than all of the other countries put together. Many of the tanks during WWI could only achive 7 MPH, while the BT-7 during WWII was capable of reaching 31 MPH while off-road. The tank crew consisted of three people, The Commander/Gunner, the Loader, and Driver.