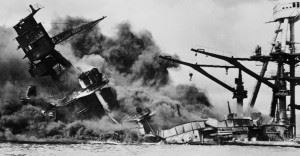 USS Arizona (BB-39) sunk and burning furiously, 7 December 1941. Her forward magazines had exploded when she was hit by a Japanese bomb. At left, men on the stern of USS Tennessee (BB-43) are playing fire hoses on the water to force burning oil away from their ship. (Credits: U.S. Navy)