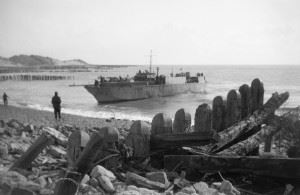 An infantry landing craft (LCI) approaching the shore to take off wounded from Walcheren, Holland, November 1944.
The occupation of Walcheren Island is going fast. Flushing is in the hands of the British and troops fanning out to the West are close to the Marine Commandos coming down from the Westkapelle beachhead (where these pictures were taken). This image shows a ship coming ashore at Walcheren to take off the wounded.