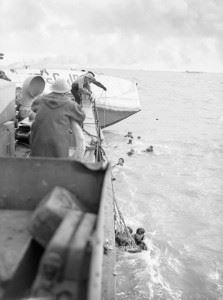 British Marine Commandos Land on Walcheren at Westkapelle. 1 November 1944, on Board An Lci (s). the Final Phase of the Battle To Free the Approaches To the Belgian Port of Antwerp Began When Royal Marine Commandos Landed at Dawn at Westkapelle, the Western Most Point of the Island of Walcheren. LCG survivors being picked up by an LCI(S) acting as a hospital ship. Smoke of battle ashore is in the background