The World War II Foundation will hosts its 2018 Festival in Normandy, France with the help of famed actor David McCallum (known for his parts in NCIS, The Great Escape, Colditz and many more). As previous year, also many of the Band of Brothers actors will be present, if they – of course – do not receive an acting job in the mean time which prevents them from travelling.

The festival will be held be held several days in June 2018 and tickets can be acquired via the website of World War II Foundation for any of the days you like to attend. This festival is the sole film festival in the world that only focuses on World War II content, including short films.

Since 2017, the World War II Foundation held their first ever Normandy – World War II International Film Festival in Sainte Marie du Mont and Carentan, France. Over 50 films made the cut in the  and a red carpet event featuring actors from the Band of Brothers television series, film directors and producers and 10 D-Day veterans kicked off the four-day festival at the famed Utah Beach Museum. 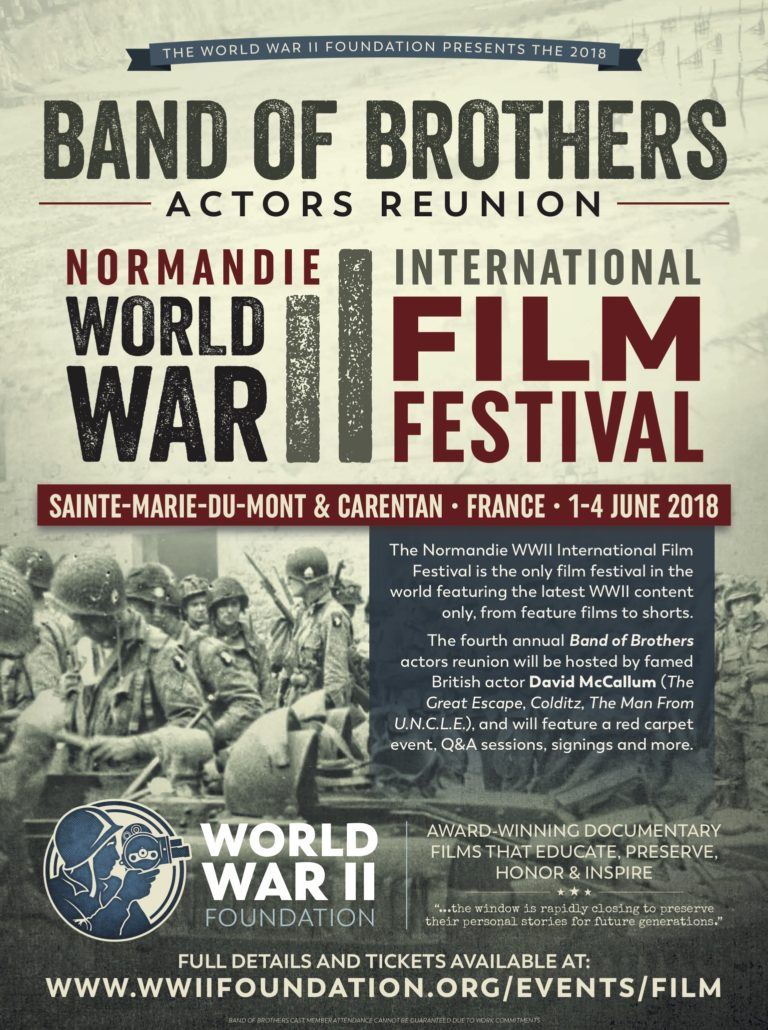 June 1 — 2000 — Red Carpet Event for the public at the Utah Beach Museum with food & drink and celebrity guests and veterans. Special musical appearance by the band Nashville Exile (with lead singer Nick Aaron, who played “Popeye” Wynn in HBO’s Band of Brothers!)

June 2 — 1700 — Behind the Scenes Panel featuring the Band of Brothers actors discussing and taking questions about Episode 2 & 3 of Band of Brothers-Day of Days & Carentan. David McCallum from the movie The Great Escape will also join us to talk about the making of the epic WWII film. Event translated into French & English. Salle du Théâtre, rue des Halles à Carentan.

June 3 — 1100 — Band of Brothers Actors signing at Utah Beach Museum (Ticketed Event). This will not include the museum entrance, which is 8 EUR.

You can find more information and purchase tickets here.