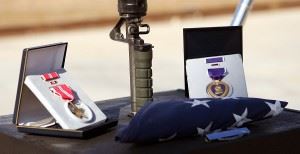 The American flag, crisply folded into a tight triangle, rested at the base of the rifle’s barrel and was flanked by three of Ehle’s most recent awards – Bronze Star on the left – Purple Heart on the right -Combat Infantryman’s Badge on the bottom. U.S. soldiers held a memorial service near Hit, Iraq April 7, 2006, to honor one of their fallen. Ehle, a 19-year-old from Alexandria, Va., died April 2, 2006, as a result of a wound received during combat operations on March 28, 2006 in Hit. (Credits: U.S. Military)