Newly digitised historic military records launched online today reveal the money paid by the British Government to the families of men killed in the First World War and the Boer War.

Digitised by Ancestry, the world’s largest online family history resource, in partnership with the National Army Museum the UK, Army Registers of Soldiers’ Effects, 1901-1929 was created by the War Office to record the money owed to 872,395 soldiers who died while serving in the First World War as well as the latter stages of the Boer War. In addition, peacetime casualties are also represented in the collection.

Each record typically lists the soldier’s name, rank, regiment, date, place of death and next of kin. For 1901-14 records, trade before enlistment is also listed.

Mothers are the most commonly listed next of kin, suggesting just how young so many of the soldiers that perished in the Great War were. Wives are also commonly listed, highlighting the devastation experienced by millions of young widows whose husbands never returned home from war. 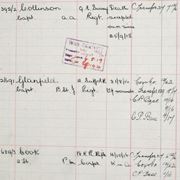 In the section where next of kin is recorded, a number of registers also list the term ‘himself’. This typically refers to men who were discharged from combat as a result of psychological disorders. If they were deemed well enough, the soldier could receive payment direct. If not, he could choose to forward the money on to relatives, or the care institution where he was being treated would hold the payment until he was considered capable to oversee his finances.

In addition, the collection details the names of both well-known and respected military men alongside the incredible stories of lesser-known servicemen. These include:

Further analysis of the collection reveals that in historic money, each soldier’s beneficiary received an average of £10.35* compensation, consisting of his final balance of pay plus a gratuity paid by the War Office – responsible for the administration of the British Army at this time. War Pensions were received as separate to this amount.

When taking inflation into account, the average payment of £10.35 is equivalent to just over £929 in today’s money. Whilst the government was committed to providing financial support to the families of those killed in action, the sheer volume of deaths meant that the sums offered by the War Office seem relatively minor today.

Miriam Silverman, Senior UK Content Manager from Ancestry comments: ‘This collection serves as a stark reminder of the millions of soldiers killed in the First World War and the Boer War. By recording each soldier’s next of kin, this newly digitised collection will be valuable for both social and family historians looking to uncover more about the lives of the men who never returned from war and the families they left behind.’

David Bownes, Head of Collections, National Army Museum said: ‘Sharing the stories of soldiers who served with the British Army is at the heart of our work here at the National Army Museum. We embraced the partnership with Ancestry as a way of making the Soldiers’ Effects ledgers more widely accessible. Some of the insights they reveal are fascinating.’