As superb history of the 509th Parachute Infantry Battalions of World War II. The title of this book was taken from the first Geronimo Commander, LTC Ed Raff who stated, “in terms of military operations the boldest plan is the best plan”. This philosophy was demonstrated repeatedly by the Battalion on the field of battle during WWII. The 509th started the War as an independent airborne regiment and although they went through many re-organizations and attachments to various Airborne and straight leg divisions, they ended World War II as an independent airborne battalion sized outfit. 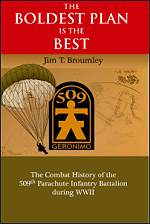 The 509th fought with distinction in North Africa, Italy, France, and Belgium. Only a small handful of men survived the entire war in this same unit. Casualty rates were high. They had a casualty rate of 92% during the Battle of the Bulge, higher than any other battalion involved in the fighting. Their first taste of combat was during North Africa. In fact, the 509th had many firsts that are listed here.

Known as the Gingerbread men for their patch design. They were blessed with many great leaders such as Yarborough who also designed the airborne wings and would later go on to serve as the Special Forces Commander, who recommended the Green Beret headgear for the Special Forces, later approved by then President Kennedy.

As I mentioned before the first Battalion Commander LTC Ed Raff, set the tone for his men. They were tough, cocky, and ready for a fight. This was clearly demonstrated in their first major conflict in North Africa when they flew non-stop from England and conducted a combat jump into the objective. While holding ground as part of Raff’s “Tunisian Task Force” they held the enemy at bay for weeks across hundreds of square miles of desert terrain, while reinforcements were late arriving.

They jumped into Anzio to ensure the beachhead was stabilized during the initial amphibious assault. Later they were attached to the 82nd Airborne Division during the Battle of the Bulge.

The 509th is a major part of American Paratrooper history for World War II.  Arguable one of the best trained paratrooper battalions the US had ranking right up there with the 505th and 504th Parachute Infantry Regiments and their assigned battalions.

For more information on the 509th I recommend checking out this weblink, https://www.509pib.com/history/

This book is available on Amazon.com and Rocky Marsh Publishing.