Robert Forczyk’s book covers the story of the Nazi Germany invasion of France and its subsequent collapse during World War II. The German operation that conquered France, Fall Rot (Case Red), was not quick and it was not easy. One of the interesting items this book brings to light is the second BEF in France, like the forces at Dunkirk, which was also successfully evacuated by sea.

The military, political, and human drama of France’s collapse in June 1940 was under- reported by history. Robert does a great job of pr 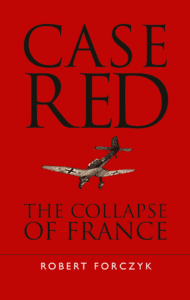 oviding a compelling and thoroughly researched historical account of the German breach of the Maginot Line, the assault on Paris and the slow disintegration of the French nation during WWII.

Throughout the book Robert covers the final three weeks of the French campaign, by examining the political landscape and military doctrine that led to their downfall. There were many causes for their defeat, but we can mainly attribute this to poor and ineffective leadership and outdated tactics left over from World War I. The subject of the French decline had not been covered before in such detail. A story left untold until now. As the author details in the book, “In the immediate aftermath of the fall of Paris, there was a sudden international about-face in opinion regarding France and it’s military. Just two weeks after the armistice, Life magazine claimed that the French defeated themselves and cited internal decay as the cause. French officers were accused of having the hearts of rabbits. “France was defeated because it suffered from internal division and its people tolerated stupid, corrupt, slothful, hopeless ineffective leadership. This type of snide journalistic interpretation was copied by others and soon settled in as collective wisdom to explain the defeat.”

As a historian covering World War II, I highly recommend this book for all serious history buffs to better understand the real reasons for the downfall of France and all its ugliness. All of Europe was falling apart at this time in the early 1940s. Europeans expected the French and the British to be the balance of power to stem the tide of radical Nazism, Fascism, and Communism. They were not strong enough to do this and history tells us that the German war machine was nearly unstoppable.

Hitler would go against his own writings and military advice he wrote in Mein Kampf. He pursued war on multiple fronts. The thousand year Reich lasted 10 years and was a complete failure that would plunge Germany into it’s own morale decay and destruction. The invasions of Poland, France, North Africa, Austria, the Low countries, Russia, all for naught. Viva La France!

About the author; Robert Forczyk has a PhD in International Relations and National Security from the University of Maryland and a strong background in European and Asian military history. He retired as a Lieutenant Colonel from the US Army Reserves having served 18 years as an armor officer in the US 2nd and 4th Infantry Divisions and as an intelligence officer in the 29th Infantry Division (Light). Dr Forczyk is currently a consultant in the Washington, DC area.

This book is available on Amazon.com (US),  Amazon.uk (UK) and Osprey Publishing.