A superb short book covering the General Leclerc led Free French Forces as well as the 2nd Armored Division development, battles, and engagements during the WWII period 1940 through 1946. Leclerc was considered the second most important figure in France at the time second only to Charles De Gaulle. Leclerc’s leadership of the Free French Forces and the 2nd Armored Division stands in stark contrast to other French Military leaders during this difficult period of French History. 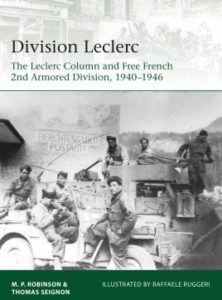 3, in just over four years Leclerc had been promoted from captain to four star general. As a passionately determined patriot his absolute loyalty to De Gaulle and his impatience with politics led to quarrels

with ex-Vichy generals as well as senior US officers. He did have the respect of Patton and Montgomery for his competency as a battlefield commander.

Measured against other Allied forces his combat record in the 2nd Armored Division equaled that of the best American and British Forces. His division developed a high caliber of Officers that showed initiative and independent thinking on the battlefield. Leclerc’s officers and men were expected to show initiative in following broad operations orders, making local decisions, and taking tactical opportunities as they presented themselves. His leaders were expected to be up front. This led to higher casualties but that was the price of war and leading from the front. Some of the larger battles Leclerc led the Free French were

About the author. M.P. ROBINSON is a Canadian author who lives with his wife and 5 children near Toronto, Canada. He has a BA (Hons) History from York University, and has authored or co-authored 8 books and numerous articles on armored vehicles and armored warfare. His historical interest in politics and warfare spans from ancient times right up to the present day. Colonel THOMAS SEIGNON, an active army officer, served in Armor branch from platoon leader to battalion commander. Having a passion for armored vehicles history, he has authored numerous articles plus a couple of books on the subject and is an active member of the French tank museum board and scientific council. He is married and has 3 kids, which does not prevent him from using the train on a weekly basis between the Joint Staff in Paris and his home in Saumur, along the Loire valley. Raffaele Ruggeri was born in Bologna where he works and lives with his wife. After studying at the Fine Arts Academy, he worked in several areas of graphics and design before deciding to devote himself to illustration. He has long been interested in military history and has illustrated several books for Osprey.

This book is available on Amazon.com and Osprey Publishing.

Readability- four and a half star

Historical Accuracy- four and a half star

Overall Rating – a high four and a half stars