An outstanding book that completely covers the brilliant efforts by the Danish Resistance in all it’s forms during World War II. The Danish resistance should be considered the most successful in Europe based on the number of Jews evacuated to safety and the overall audacity of the resistance fighters to disturb and confound the Germans and German Intelligence networks.

David’s book thoroughly researched and detailed the activities and guerrilla activities of the Danish resistance during World War II. I must report that I am proud of the daring and adventurous spirit of the Danes that performed resistance operations at this difficult time in their history. The Danes evacuated to safety thousands of Jews that were forced to go into hiding from the Gestapo and other German intelligence offices. The stories provided in this book bear witness to the Danes brilliance in developing unique ways to hide, feed, and transport these Jews fighting for their lives in Europe. The Danes, Swedes, British, involved in the resistance operations was immense, in depth, and focused on defeating the Germans. The resistance organized, printed and distributed resistance newsletters and papers at great peril to themselves. 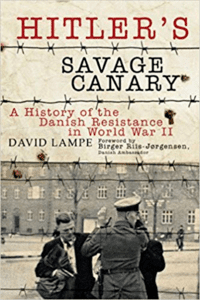 working with the British SOE were able to offer great intelligence to the Allies in several ways. These same Danes often returned to their motherland after escaping to later serve as resistance leaders for their country. When the Danes were having problem getting the British to supply them with radios for their resistance, they literally made their own. These radio sets were so good that the British would later adopt the design and use it for other operations. The obstacles overcome by doing this were miraculous. The newly designed sets would no be able to operate using DC as well as AC current! When returning deep cover radio operators, the British no longer trained them before hand if they were headed to Denmark. They would let the Danes train their own people. The Danes were also leaders in developing antennas to be used by clandestine radio operators. Often using indoor antennas right under the noses of the Gestapo and their direction-finding units. As a trained radio operator and communications expert, I can say that these accomplishments were groundbreaking at the time and clearly set the example for others to follow. The ingenuity and skill of the Danes resistance was truly outstanding.

Another outstanding story involves the island of Christianso. The Germans heard reports of people retreating to this island for vacation. After investigating the island, they determined that the island was part of Denmark that had gone un-noticed by the Germans. The island was not adhering to blackout conditions and was considered a haven from the Nazis. Soon after this discovery and blunder the Nazis quickly took control of the situation and enforced blackout restrictions there as well. Amazing!

I found this to be an eye-opening account of the Danish resistance operations during World War II. The research and depth of the stories make this book a wonderful treasure. Im surprised it is not more popular than it is. It clearly demonstrates the length man will go to in resisting the evil forces that are ever present in this world. Denmark was certainly a bright light shining in the black hole that was Europe during the German occupation.

About the author. DAVID LAMPE served with the US Army in Europe during World War II and is the author of The Savage Canary: The Story of Resistance in Denmark. Sadly, he passed away in 2003. This book is available on Amazon.com (US), Amazon.co.uk (UK) and Pen and Sword Publishing.