There is an old concept that reminds us that although a particular movie was good, the book is usually significantly better. It certainly applies to the Story of The Great Escape.

The film was based on the real events but with numerous compromises for its commercial appeal, such as including Americans among the escapees (none of whom were actually American). While some characters were fictitious, many were amalgams of and some based on real people. There were no actual escapes by motorcycle or aircraft nor were the recaptured prisoners executed in one place at the same time. 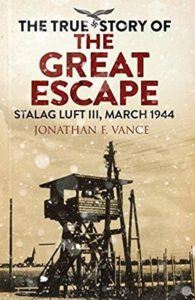 The author Jonathan Vance has done a masterful job of researching and documenting the 67 escapees that participated in the Great Escape from Stalag Luft III. The author’s detailed biographies and stories of each of the escapees are done in a compelling, masterful way that pays tribute to each person, their family background, providing a short history of their assignments and ultimately their adventures in escaping from the enemy during the war. I can’t think of a better tribute to the men who were executed after they had escaped and recaptured by the Germans. This story tells the story of the British Airmen who were determined to upset, confound, and frustrate their German adversaries at each and every opportunity during their imprisonment. The author goes to great length to explain the various skill sets these men brought to the challenge of imprisonment as well as skills they developed on the spot during their time in prison. Skills such as map making, compass making, tailoring suits and uniforms, forging documents and papers, deconstructing and reconstructing doors, beds, barracks, plumbing, ventilation ducts, small railways, and dirt evacuation devices. These skills certainly helped enable their escape, but most escapees were recaptured within a few days. Travel within the Nazi regime in Europe at the time was closely watched by the military, local police, and locals fiercely loyal to the Germans. Travel papers and documents received the most scrutiny because these were your only real credentials at the time. If any of the forged documentation looked funny or odd, it was questioned and invalidated on the spot with very little leniency. I won’t spoil any of the many details of the planning and execution of the escape, but I will comment that it was better planned than some of our military operations during WWII. Operation Market Garden comes to mind immediately for me. The escape from the German Stalag Luft III was the largest breakout of its kind during the war. Sixty-Seven men made it out, and only three made it outside of Germany. Fifty of the men that made the escape and were caught, were executed by the Gestapo. Horrible retribution and punishment for their honorable attempts at escape.

Bear in mind there are other memoirs and stories about the Great Escape that have been published but I believe this particular well-researched book will stand the test of time and scrutiny by scholars and normal readers alike and in the end and this book will be the gold standard for the Great Escape’s history.

Dick Churchill was the last surviving of the seventy-six escapees before his death on 15 February 2019; then an RAF Squadron Leader, he was among the twenty-three not executed by the Nazis. Churchill, a Handley Page Hampden bomber pilot, was discovered after the escape hiding in a hayloft. In a 2014 interview at the age of 94, he said he was fairly certain that he had been spared execution because his captors thought he might be related to British Prime Minister Winston Churchill.

This book is available on Amazon.com (US), Amazon.co.uk (UK), and on Pen and Sword.