The Defense POW/MIA Accounting Agency (DPAA) announced today that the remains of a U.S. serviceman, unaccounted for since World War II, have been identified and are being returned to his family for burial with full military honors.

Navy Motor Machinist’s Mate 1st Class John E. Anderson, 24, of Willmar, Minnesota, will be buried May 28 in his hometown. On June 6, 1944, Anderson was in Landing Craft Tank (LCT), Mark 5, Hull Number 30, which landed on Omaha Beach, France during the invasion of Normandy. Upon landing, men and equipment left the tank, while Anderson went to the engine room to check the sand traps. The tank was subsequently destroyed by either enemy fire or an enemy mine. Anderson was killed in the attack.

On July 1, 1944, a set of remains were recovered from the boiler room of the LCT, and were interred by the Army at the temporary American cemetery near Omaha Beach, St. Laurent-sur-Mer #1 and designated X-91 St. Laurent. 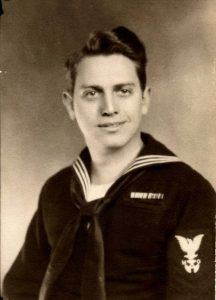 At the time, Army Graves Registration did not have access to the Navy’s records, and were unable to identify the remains as Anderson’s. The remains were later reinterred at the Normandy American Cemetery at Colleville-sur-Mer, France.

In January 2015, following a request by the family of MoMM1c Anderson, a new historical investigation by DPAA showed a strong association between the unidentified remains and Anderson.

Under its new disinterment process, in August 2015, DPAA successfully recommended the remains designated X-91 St. Laurent be disinterred for analysis by the DPAA laboratory.

To identify Anderson’s remains, scientists from DPAA and the Armed Forces DNA Identification Laboratory used circumstantial evidence; mitochondrial DNA analysis, which matched a sister and a nephew; as well as anthropological analysis.