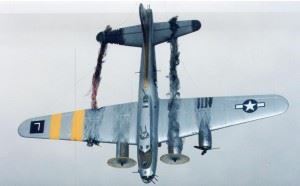 “Lady Jeannette” Damage consisted of the right wing, #4 outboard engine and cowling gone, with a fire blowing past the tail. The #3 inboard engine was the only engine that was undamaged and was providing emergency power. The #2, left wing, inboard engine had one or more cylinder heads gone and was pumping smoke out, leaving a trailing smoke trail. The #1, left wing outboard engine had been killed by the second FLAK burst, with it propeller blades unable to be feathered, they created a drag to the air flow around the engine. The bomb bay doors remained open, helping to increase the drag. When reviewed by Boeing engineers, who had helped build the B-17s, all of them agreed, she should have crashed immediately and she only kept flying because of the skill of the pilots and, if the damage had been different in any way, she would have crashed, except it all balanced out. (Credits: Model via Author)