The 718th Amphibian Tractor Battalion shipped out just in time to participate in the invasion of Leyte Gulf, where they took part in raids behind Japanese lines. Though seeing a fair amount of action, they only suffered one KIA.

After the Philippines, they participated in the invasion of Okinawa where their duties were more supply and logistical in nature, rather than engaging the enemy.

Their AMTRACs were worn out and had been sunk off the coast of Okinawa, replaced by new AMTRACs in preparation for the assault on Japan. When the war ended, they left these behind and received tanks to use for occupation duty in Korea.

Jerry Smith was born on January 16, 1925. He grew up in Cincinnati, Ohio and attended Walnut Hills High School. After graduating, he was drafted into the army and placed in the ASTP program, through which he attended college to become an engineer. After less than a year, the army realized the war wasn’t going to last long enough to make use of engineers three years down the road, so they shut down the program and put everyone into the regular infantry.

Because Jerry smith had flat feet, he was sent to train in tanks at Fort Knox, Kentucky. Later, he was transferred to AMTRACs and joined the 718th AMTRAC Battalion at Fort Benning in Columbus, Georgia. He served as a driver and armorer on an LVT-4 “Water Buffalo” (or “Alligator”). He was qualified as a marksman on the .30 and .50 caliber machine guns and could assemble two of each from a pile of parts blindfolded. He passed away on July 25, 2007. His son, Michael Smith, upkeeps the honor of his father’s memories and service. 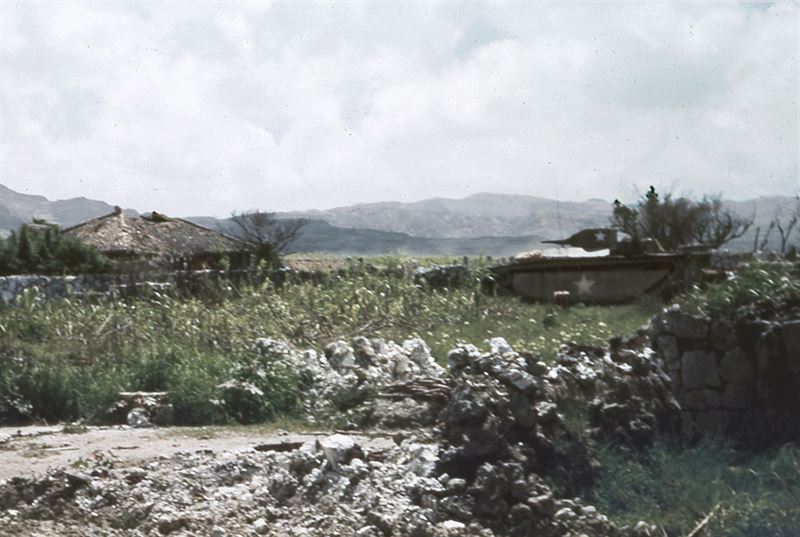 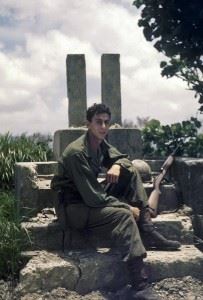 Okinawa countryside with Amtracs. Jerry used to string a trip wire at night between his tank and these tanks to discourage Jap attacks. One night he used flares instead of grenades and when three Jap soldiers snuck within the perimeter, one flare went off. The Japanese thought the flare was a grenade and hit the deck. The flare lit them up, but, as it was a red flare, the Jap uniforms looked green. As a result, Jerry hesitated before letting loose with a burst from the .30 cal machine gun.

When the Japanese got up and ran, they were chased by flying lead and one of the them was wounded. Later that night, Jerry-still jumpy from his earlier encounter with the enemy-and the boys broke out a bottle of Scotch they had gotten in trade from the merchant marine sailors. He woke up the next morning with a hangover and was so thirsty for salty water that he drank the brine from a bottle of olives his parents had sent to him. (Credits: Michael Smith) 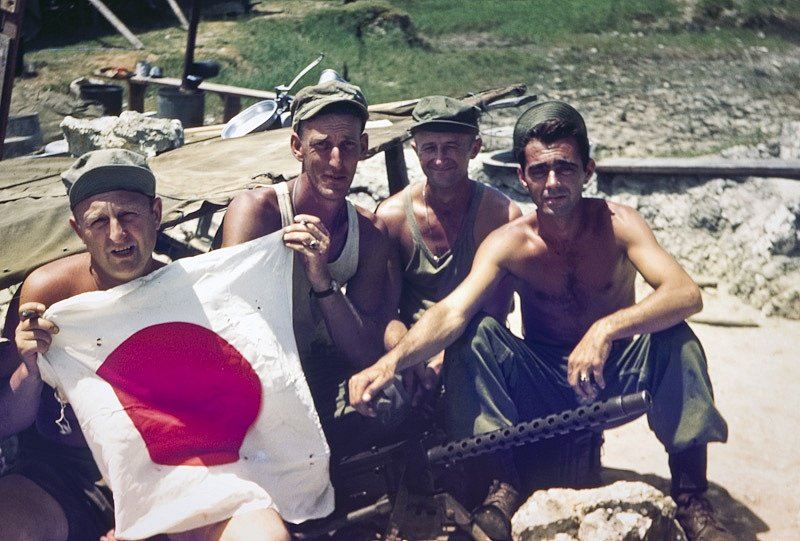 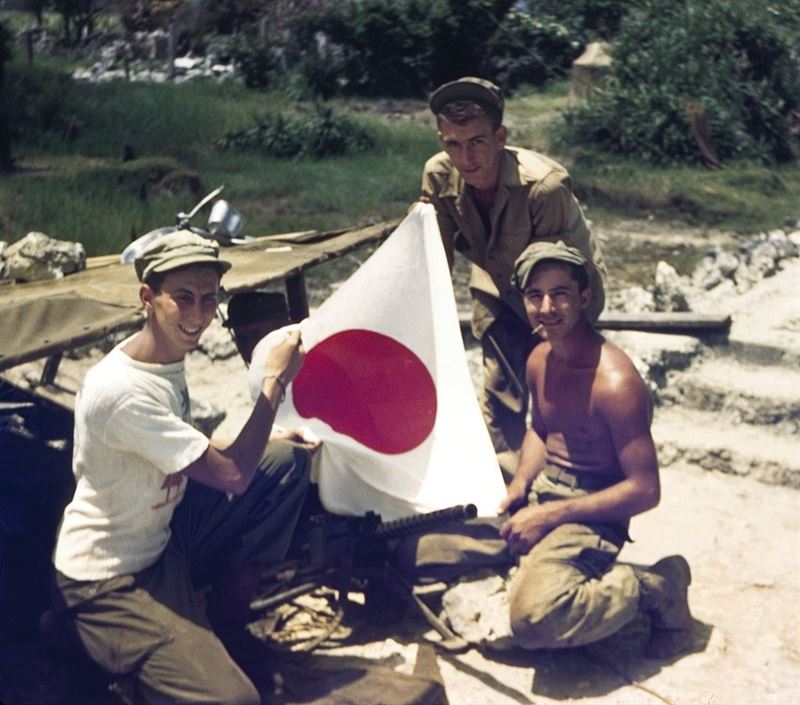 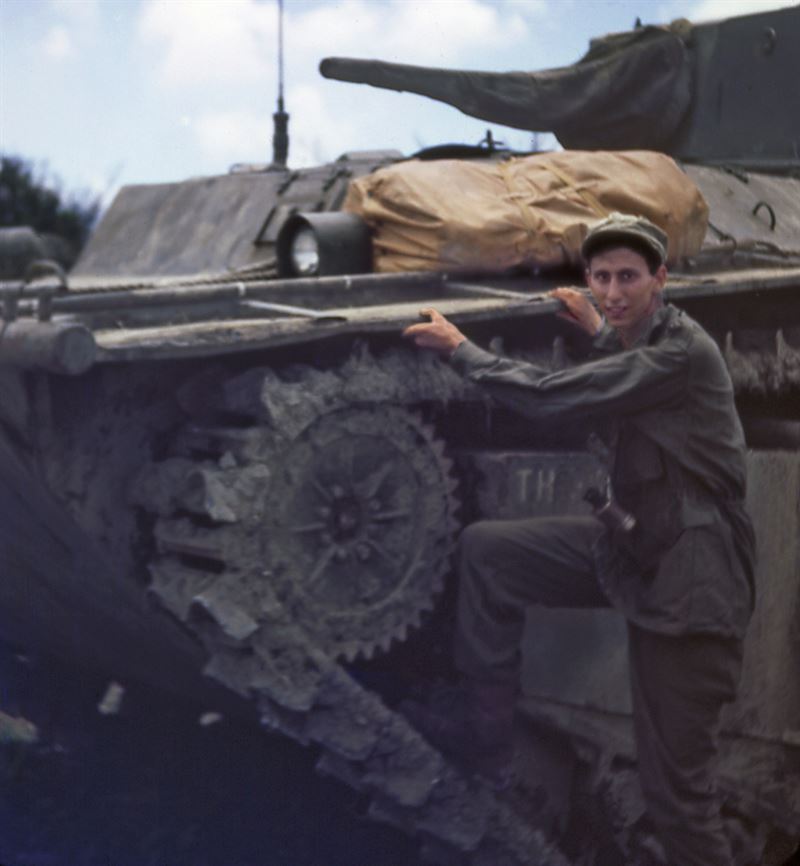 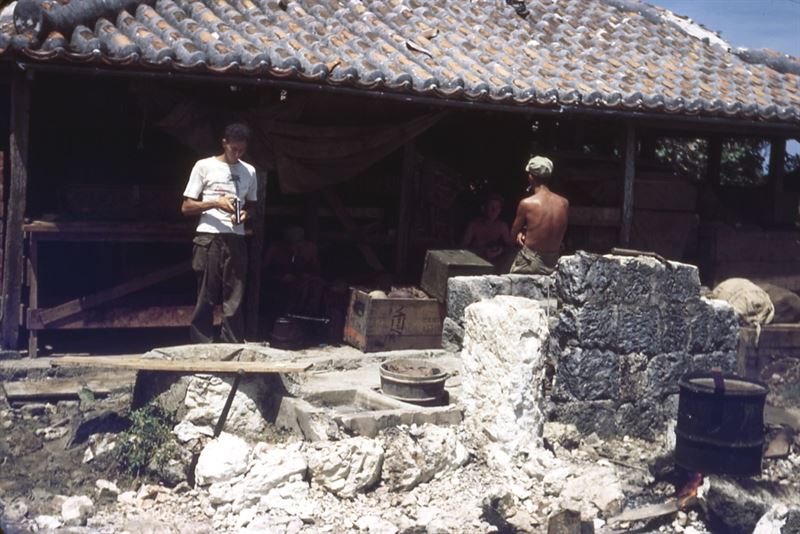 Cleaning somebody’s 45. In the building behind, all the company’s machine guns were stored. They were removed from the tanks in order to keep them out of the weather. New tanks were issued to the company for the invasion of Japan and the old tanks (minus the guns) were sunk. But since the A-bomb was dropped the invasion was made unnecessary. (Credits: Michael Smith) 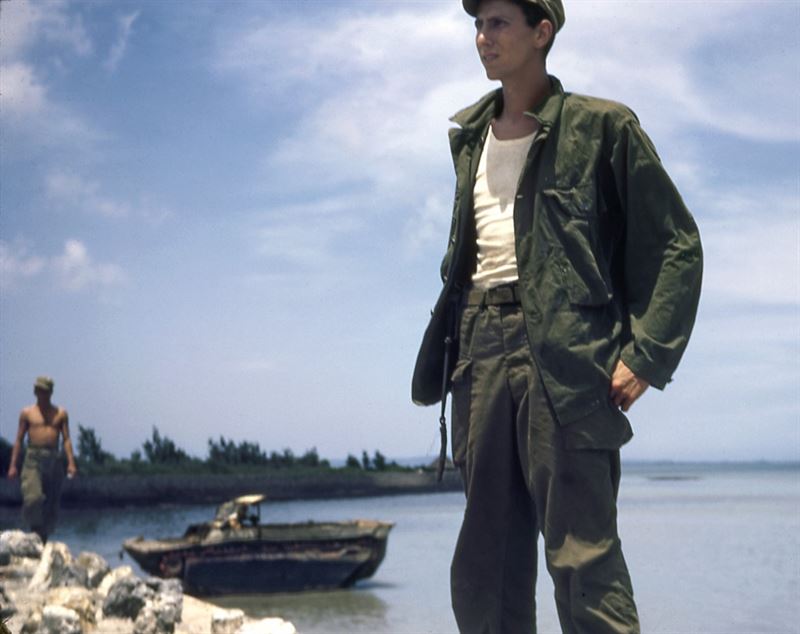 Jerry at the shore, Amtrac in background parked at the seawall at high tide; southern tip of Okinawa. (Credits: Michael Smith) 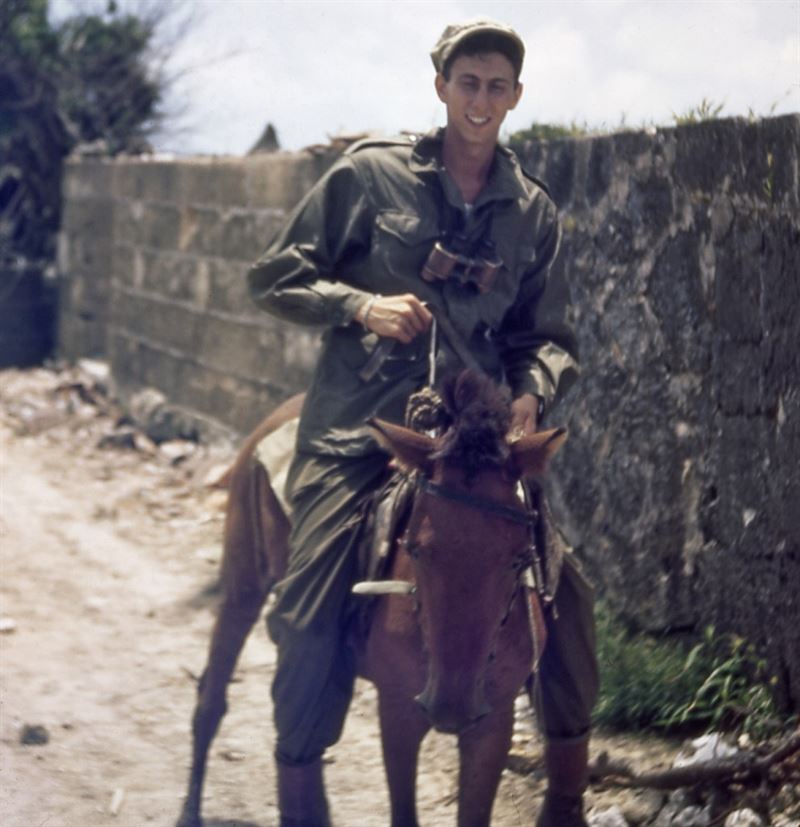 Jerry’s legs are longer than the horse’s. Note the binoculars; they were taken by the Japanese from MacArthur’s American soldiers in Bataan when they surrendered. Then, the binoculars returned to American hands when the Jap soldier from Bataan was killed in the Philippines. Jerry bought them there from another American soldier. American GI’s were careful to wait until Jap soldiers were right upon their foxhole before opening fire. This assured that, come the next morning, the soldier in the foxhole would have first crack at any good souvenirs on the Jap’s body. (Credits: Michael Smith) 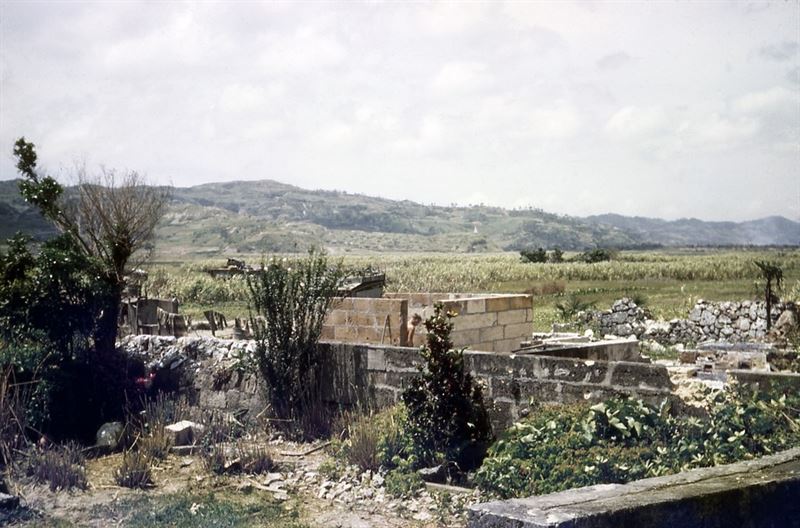 A demolished building with two Army amtracs parked behind it. (Michael Smith) 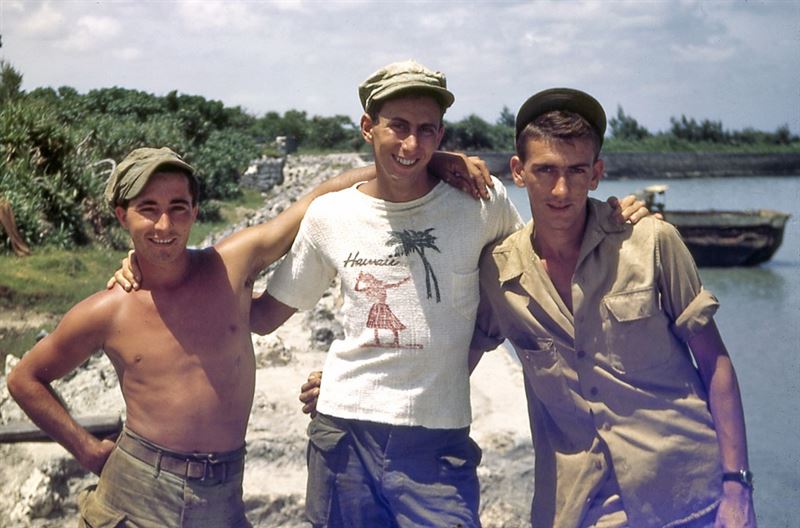 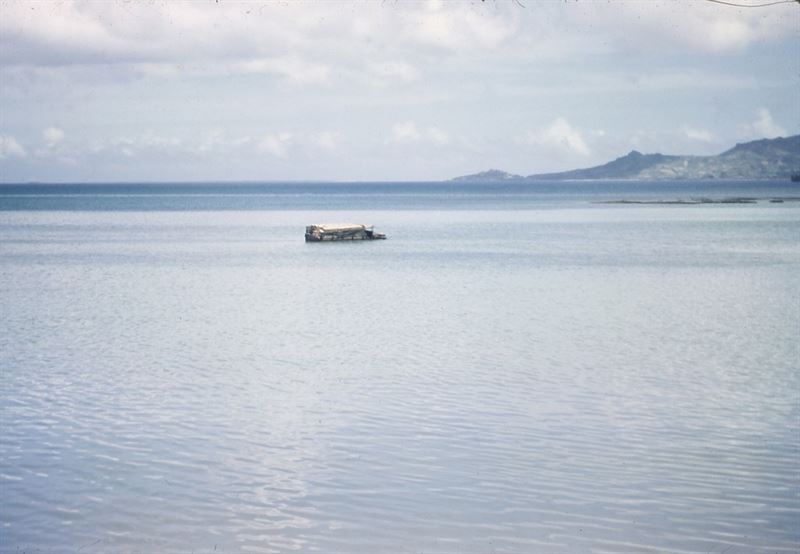 Vehicle being sunk off the shore of Okinawa. (Credits: Michael Smith) 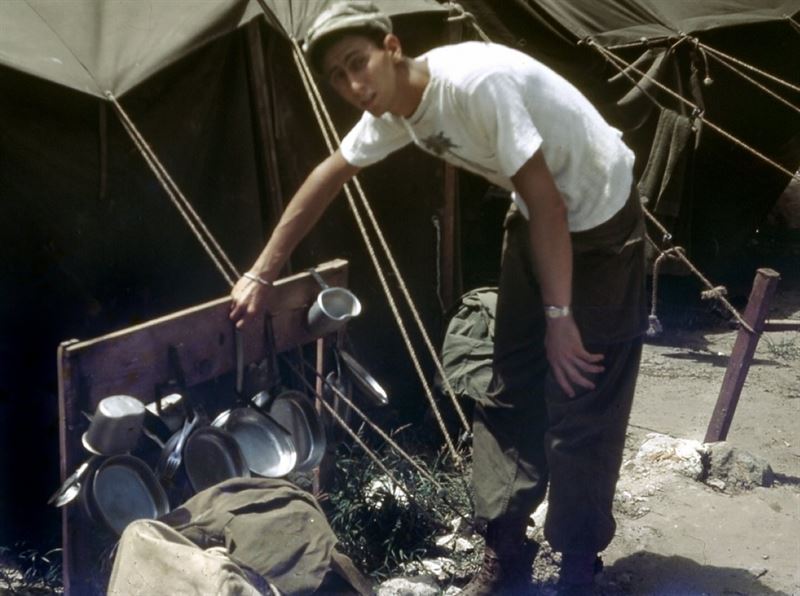 Jerry ready for dinner. Mess kits stored for the squad of 14 living in this tent on the Southern tip of Okinawa. Company moved here to hold the southern tip after it was (supposedly) cleared of enemy forces. (Credits: Michael Smith) 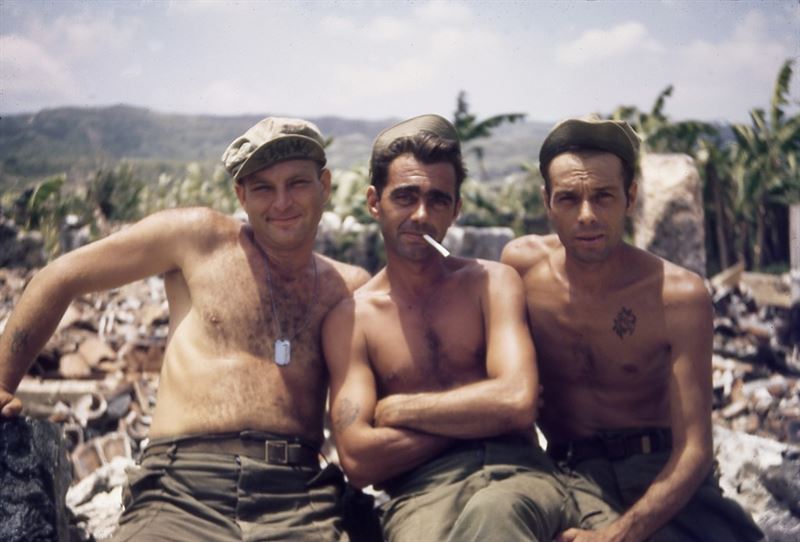