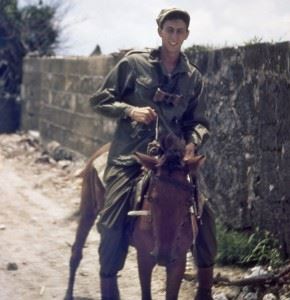 Jerry’s legs are longer than the horse’s. Note the binoculars; they were taken by the Japanese from MacArthur’s American soldiers in Bataan when they surrendered. Then, the binoculars returned to American hands when the Jap soldier from Bataan was killed in the Philippines. Jerry bought them there from another American soldier. American GI’s were careful to wait until Jap soldiers were right upon their foxhole before opening fire. This assured that, come the next morning, the soldier in the foxhole would have first crack at any good souvenirs on the Jap’s body.