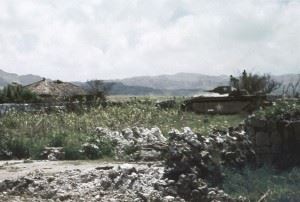 Okinawa countryside with Amtracs. Jerry used to string a trip wire at night between his tank and these tanks to discourage Jap attacks. One night he used flares instead of grenades and when three Jap soldiers snuck within the perimeter, one flare went off. The Japs thought the flare was a grenade and hit the deck. The flare lit them up, but, as it was a red flare, the Jap uniforms looked green. As a result, Jerry hesitated before letting loose with a burst from the 30 cal machine gun. When the Japs got up and ran, they were chased by flying lead and one of the them was wounded. Later that night, Jerry-still jumpy from his earlier encounter with the enemy-and the boys broke out a bottle of Scotch they had gotten in trade from the merchant marine sailors. He woke up the next morning with a hangover and was so thirsty for salty water that he drank the brine from a bottle of olives his parents had sent to him.