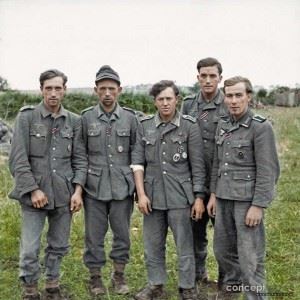 A group of veteran German prisoners captured at Maltot, south west of Caen, Normandy. ‬
23rd of July 1944.
We think that some or all of these ‘Veterans’ could be from the Grenadier Regiment 980 (formerly 348), 272nd Infantry Division (formerly the 216th), which had been decimated on the Eastern Front in July 1943.
They all are showing the The Iron Cross 2nd Class medal ribbon.
Three are wearing the Eastfront medal ribbon, three have the Wound Medal in Silver (2nd class) for being wounded three or four times).
One has the Wound Medal in Black (3rd class, representing Iron) for those wounded once or twice by hostile action).
The Grenadier in the centre also wears the Iron Cross 1st Class and a Silver Assault Badge.
(Source – © IWM B 7928 – Sgt. J Mapham J – No 5 Army Film & Photographic Unit)