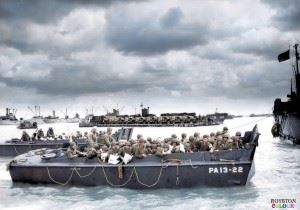 U.S. troops disembarking on Utah Beach, 6 June 1944. The LCVP in the foreground was assigned to the U.S. Navy attack transport USS Joseph T. Dickman (APA-13), which had sailed from England on 5 June and arrived off Utah Beach early the next day. Joseph T. Dickman landed her troops without a mishap, and steamed to Portland with casualties in the afternoon of 6 June 1944.