Steven A. Ruffin’s The Lafayette Escadrille: A Photo History of the First American Fighter Squadron is much more than a collection of photographs illustrating the formative years of combat aviation. While Ruffin’s pictorial arrangements are the heart of the book, his writing is descriptive and informative. Ruffin entertains his audience with the human-interest stories of aviators facing the grueling demand of combat, while placing the Lafayette Escadrille’s achievements in the larger, strategic context of World War I. He covers all aspects of the formation and growth of the unit, from the motivation of American citizens who felt compelled to travel to Europe to fight on behalf of France in 1914, the evolution of the role of aircraft from unarmed reconnaissance assets to armed pursuit airplanes and strategic bombing platforms, and its ultimate transition from the French Air Force to the United States Army Air Service once America entered the war in support of the Allied nations.

Ruffin does an excellent job describing the variety of paths the men who made up the squadron travelled to France to offer their services. He addresses the fact that American volunteers risked their citizenship to serve in France but did so with the tacit encouragement of the American ambassador, despite the fact that the United States was a neutral country at the beginning of the war. Ruffin conveys the sense of excitement the men felt and how it quickly turned to disillusionment once they enlisted in France’s Foreign Legion and experienced as infantrymen. Many of the men originally volunteered for the air service to get out of the trenches, rather than out of any overwhelming desire to fly.

Once the Lafayette Escadrille formed and began to receive publicity for their exploits, volunteers who truly wished to serve as combat pilots began to join its ranks. Ruffin depicts how the stress and strain revealed each man’s character once the squadron became operational and began flying missions over the Western Front. The men began to learn which men were reliable, which were brave but reckless, and which did not possess the mettle to perform under battle conditions. and leaders emerged who set the standards and tone of the squadron.

The author takes pains to not romanticize the air war over the Western Front and emphasizes the toll that open cockpit flying took on the pilots. Extreme cold at high altitudes, fatigue from long patrols, and the nervous anticipation of battle characterized their experiences. Many sought to fortify their courage with alcohol, and some flew under the influence. Ruffin also reveals that only one member of the squadron, Raoul Lufbery achieved the designation of “ace”, a pilot who shot down five or more enemy aircraft. Apparently, men with the capacity to be truly successful fighter pilots were quite rare, and most members of the squadron, while demonstrating a great deal of courage, lacked the qualities of the truly gifted combat aviator. Ruffin does not provide these stories in an attempt to besmirch the reputation of the squadron, but to provide a true picture of how its members coped with fear and uncertainty. Such details serve to humanize the men who fought over 100 years ago, when it may be tempting to applaud their courage without considering the psychological burdens they carried.

Ruffin does an excellent job describing the technology of the aircraft flown by the men of the Lafayette Escadrille, and once again, does not rely on cliches or popular imagery in his descriptions. He emphasizes, despite common misconceptions, that World War 1 aircraft did not consist of rattletrap, kite-like designs, but actually incorporated up to date engineering principles and designs with emphasis on speed and maneuverability rather than pilot protection. He also discusses how Allied and German aircraft remained in a state of improvement throughout the war, with designs evolving to incorporate lessons learned in combat and maximize capabilities to gain whatever possible advantages in the air that could be found.

In addition to Ruffin’s excellent writing, the book is replete with both black and white and color photos depicting the men of the squadron, the aircraft they flew and the areas in France over which they flew and fought. Ruffin conducted extensive on the ground research and took photos of a variety of locations in France where the squadron operated. He presents several sets of pictures contrasting the locations during the war with his more recent pictures and in most instances the landscapes and buildings retain some semblance of how they appeared a century earlier. These photographs make the book a delight to read and add tremendous value to the experience.

The Lafayette Escadrille: A Photo History of the First American Fighter Squadron is a wonderful book. Ruffin’s background as a pilot and Air Force officer comes through and he makes the technical aspects of combat flying understandable to non-fliers. This practical knowledge combines with good writing and excellent illustrations to produce an informative, highly readable volume that military enthusiasts and general readers alike will benefit from reading.

This book is available at Amazon, Barnes and Noble, and Casemate Publishers.

Overall Rating – four and a half stars

The Lafayette Escadrille: A Photo History of the First American Fighter Squadron 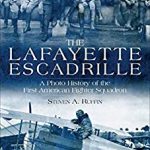