Army food, whether the bacon, hard tack, and sour wine of the Roman legions, or the K-rations of World War II, has rarely if ever inspired soldiers praise. Even the modern-day MREs, which offer a menu that’s considerably more varied than army chow in the days of yore, were jocularly known as Meals Refused by Ethiopians. Still, an army that was fed was considerably better off than one that was starving, and the Union soldiers of the Civil War had the satisfaction of knowing that, however lacking in variety their food might have been, they made it through the four years of the war confident that they would be fed. The Confederate Army’s rations suffered as a result of the blockade, but as most of the war was fought in the South, they could be sure that they’d have sufficient tobacco both for smoking and for trading for Union coffee when they were on picket duty. 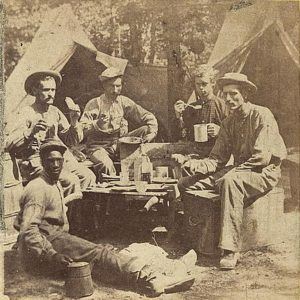 A soldier’s haversack contained the rations that he would need for a few days of eating but for many of the men, unused to cooking because a woman back home had been the one to put the food on their plates, meal time was uninspiring. A New York soldier in the 128th New York Volunteer Infantry described his meal:

“We grab our plates and cups, and wait for no second invitation. We each get a piece of meat and a potato, a chunk of bread and a cup of coffee with a spoonful of brown sugar in it. Milk and butter we buy, or go without. We settle down, generally in groups, and the meal is soon over… We save a piece of bread for the last, with which we wipe up everything, and then eat the dish rag.”

With almost two million soldiers to feed over the course of the war, it was apparent that logistics would require some tweaking. The United States Sanitary Commission, more commonly known as The Sanitary, addressed the problem systematically. The volunteers were expected to know what foods were available depending on the season and how they could preserve foods to be transported and stored. They had to know how to find and distribute the food to the soldiers when they were in the field and to make sure that the flow of nourishment was reliable and constant.

James M. Sanderson, a New York hotel operator who was a member of The Sanitary, was concerned that the soldiers were receiving food lacking in quality. He solicited the aid of the governor of New York, and then took his show on the road, visiting soldiers in the field so that he could give the some lessons in basic cooking. This was a far cry from The Food Network, but his experiments with the soldiers of the 12th New York imbued him with a sense of purpose.

The Union had just suffered a defeat at the First Battle of Bull Run when Sanderson brought his proposal to the War Department at just the right time, as the government was slowly realizing that the war would not be over in a matter of days. Sanderson recommended that for every 100-man company, the trained cook, who would be known as the Cook Major, could have two privates appointed to help. For a salary of $50 per month, the Cook Major’s job was to ration and prepare the food and assign work to his assistants. The Senate’s Military Affairs Committee saw the wisdom of his plan, made some adjustments, and gave him a commission as a captain in the Office of the Commissary General of Subsistence.

Sanderson promoted culinary skills but he also advised on matters of hygiene. He warned against cooking in dirty pots and pans, saying ““Better wear out your pans with scouring than your stomachs with purging.” 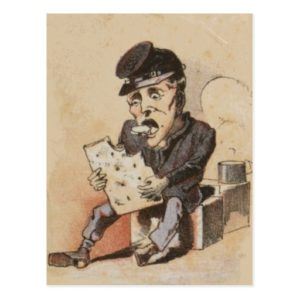 One of the army staples was a flour biscuit known as hardtack. Hardtack, which was prized because it was durable and not because of any gastronomic appeal, was also called “tooth-dullers” in acknowledgment of the challenge the baked, dried bread presented to one’s dental stamina. Hardtack was baked in the factories of the North and shipped to the Union soldiers; it traveled well, but in order to eat it, soldiers had to use rocks or their rifle butts to break it if they couldn’t soften it in their coffee or in cooking grease. The soldiers did the best they could, though; crumbled hardtack could be fried with pork and bacon fat to make a dish known as skillygalee.

But for many of the soldiers, it wasn’t the food that made the difference, it was the drink. The soldiers received green coffee beans to roast and grind, but when the work was done and the coffee was ready to drink, it had the power to counteract the exhaustion of a night march. 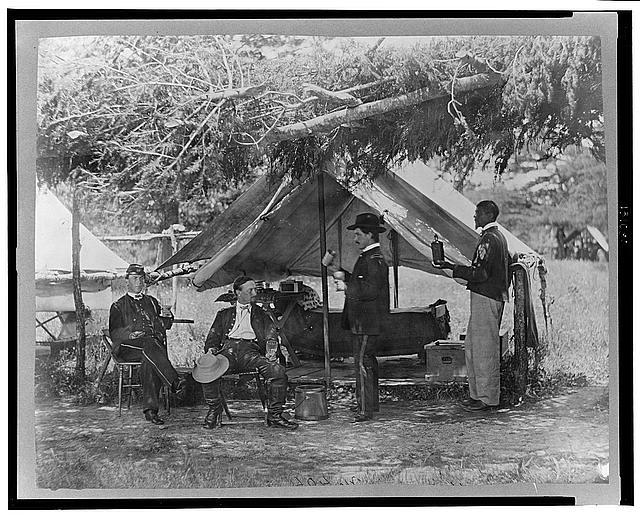 Sanderson, like many a cook of today, branched out from his work to write a cookbook, Camp Fires and Camp Cooking; or Culinary Hints for the Soldier: Including Receipt for Making Bread in the “Portable Field Oven” Furnished by the Subsistence Department, the first cookbook distributed to the military.

Army food did not inspire nostalgia. One soldier vowed that when the war was over and he returned home, he did not intend “to live on wormy crackers and bacon, coffee and tea sweetened with molasses, mush or bread and molasses, sour corned beef, nor raw salt pork, as I have to when on a march.”