I had the opportunity to travel to France in March of 2020 in order to tour the Normandy Region, with a focus on the D-Day sites. Over the course of 4 days, I was able to walk the ground where airborne legends of both the American and British armies made history, along with their brothers in arms who attacked from the sea.

We began our tour at St. Mere Egliese, the 82nd’s D-Day objective and the site of the church made famous by trooper John Steele, who wound up suspended from its steeple by his parachute. The most striking feature of the church is the beautiful memorial stained glass window, commemorating the events of 6 June 1944 and the liberation of the town from the German occupation forces. 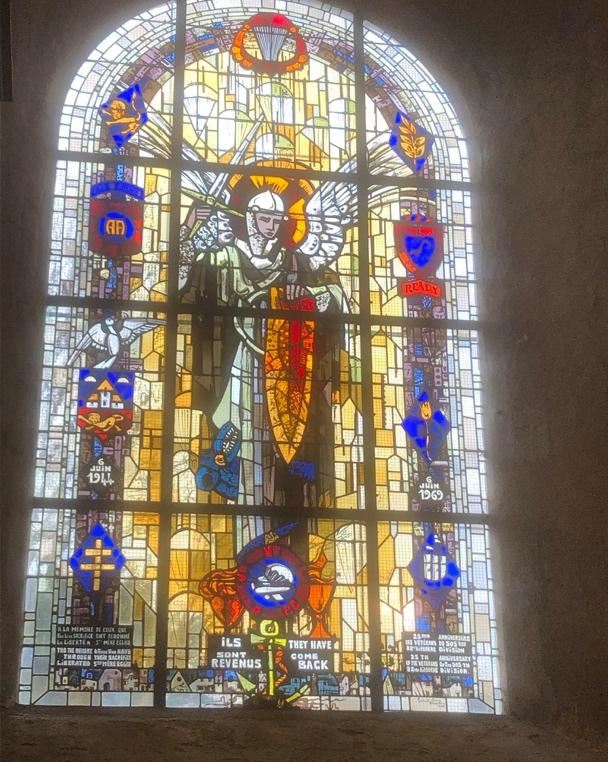 In addition to the church, St. Mere hosts an excellent airborne museum. It contains numerous artifacts, both donated by former troopers and unearthed from the battlefield itself. The most impressive feature is a full-sized C-47, “The Argonia”, which actually dropped troops as part of Operation Neptune on D-Day, and later during Operation Varsity, the jump across the Rhine in 1945. Other excellent exhibits include John Steele’s decorations, and a mockup of a Waco Glider.

After touring the museum, we drove out to La Fiere Causeway, site of a fierce battle comprising elements of the 325th GIR, 505 PIR and 507th PIR to seize a passageway over the Merderet River in order to prevent counter-attacking German formations from assaulting the landing sites at Utah Beach. As a proud alum of the 325th AIR, it was very moving to be able to walk across the causeway and read the accounts of the fierce fighting, particularly the exploits of Medal of Honor Recipient Charles N. DeGlopper.

The products below are affiliate products from Amazon.com and provide ARGunners.com with a monetary source to maintain this website. We receive a small amount (AT NO COST TO YOU) from the sale of items. Use the search box below, you can purchase anything you need and we will receive a commission.

From Saint Mere Egliese we proceeded to the town of Saint Marie du Mont, which was the 101st Airborne Division’s primary D-Day objective. We found Brercourt Manor in the vicinity of the town and headed out to walk in the steps of Easy Company, 506th PIR, of “Band of Brothers” fame. The German battery of 155s at Brercourt were a threat to the American landings at Utah Beach. As most know from either reading the book by Stephen Ambrose, or watching the HBO series, Easy Company succeeded in destroying the guns, and as a result the troops coming ashore faced a reduced threat from indirect fire. Utah Beach is very close to this location, so we ended the day with a very humbling walk along the shoreline.

Along the way to our flat, we came across the German War Cemetery at La Cambre and decided to stop. This is a very sobering spot, with black headstones in groups of five, representing a collection of fallen German soldiers. The cemetery plainly acknowledges these troops fought in defense of a bad cause. It gave me even more to reflect upon as evening fell.

The following day, we grabbed breakfast and then headed out to start the day at the landing site of the U.S. Rangers at Pointe du Hoc. As expected, seeing this location was very impactful. The gun positions and bunkers are well preserved and the whole area is beautifully curated. The valor displayed by the Rangers is obvious over 75 years later, given the sheer cliffs they scaled to attack the enemy positions. We spent over an hour here before moving on to Omaha Beach, Dog Green sector in the vicinity of Vierville.

Once again, the only appropriate word I can find is humbling. German positions dominate the stretch of beach where the 116th Infantry Regiment came ashore and one can easily imagine how they received enfilading fire. That the troops forced an entry and moved inland is nothing short of a miracle. From Omaha Beach we moved on to the American Cemetery above Omaha Beach’s Eastern flank.

Visiting the American Cemetery was the most powerful moment I experienced at Normandy. The Cemetery is the final resting place of over 9000 Americans and serves as a memorial for over 1,000 additional missing personnel. The cemetery holds the remains of Medal of Honor Recipient, Brigadier General Theodore Roosevelt Jr,, son of U.S. president Theodore Roosevelt.

We spent our final day in Normandy in the British Sector, on the Eastern Flank of the beachhead. We started at Pegasus Bridge, where the British 6th Airborne Division seized a valuable bridge in order to prepare the way for follow-on invasion forces. Subsequent missions involved seizing or destroying additional bridges and securing glider landing zones during the early hours of 6 June 1944. The British airborne has a fantastic memorial and museum at the site of Pegasus Bridge. I was surprised that this was my favorite stop during the trip, because the museum really took the time to focus on the stories of individuals, whether they were British troopers, or French resistance fighters, men or women, officers or enlisted men. The museums artifacts are well preserved and presented and include the actual Pegasus Bridge seized by the British in 1944. A more modern version now spans the water where this bridge once was, designed and built to look much like the original did in 1944.

Normandy is pilgrimage that every American paratrooper should make, and more than once I found myself at a loss for words. Names and places that make up our Division history are now tangible memories and I feel beyond blessed for this opportunity to see where our Division cemented its reputation as America’s Guard of Honor.